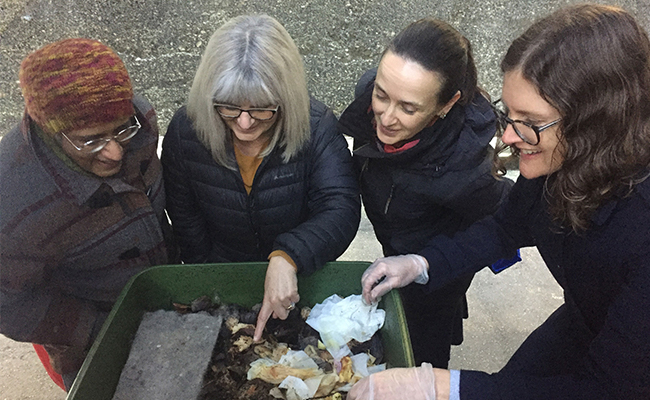 Checking out the food in their worm farm on the Dunedin campus are (from left) Tushar Robins, Donna Suszko, Jennie Henderson and Emma Brooks.

Caring for a work worm farm is not only reducing the Clocktower Building’s waste to landfill, but also teaching staff new skills for home, ‘feeding’ their gardens, and forging new relationships – now you can have one too.

Another 10 farms have arrived, adding to the pilot of seven on the Dunedin campus: “It would be great to find some more staff to adopt happy little families of worms to thrive on the office food waste”, Sustainability Office Head Ray O’Brien says.

Like many good things, the Clocktower’s worm farm venture started with a chat.

Emma Brooks and Tushar Robins say they began chatting about having a worm farm for room G41’s sustainability Green Your Scene team, using food scraps to feed it.

Unknown to them, in another part of the Clocktower Building, Jennie Henderson and Donna Suszko were chatting about the same thing for the Development and Alumni Office’s Green Your Scene team.

Both teams thought the first logical step was to have a chat with Clocktower catering and services coordinator Annette Hogg, so she put the kindred spirits in touch.

Neither pair knew the other but now they have harvested their first worm castings from the farm supplied by our University’s Sustainability Office and will spread them on home gardens as fertiliser.

Jennie says, with a smile, she just likes sending out emails telling people what to do – the worm feeding roster, with calendar invites as reminders.

Like any true bonding experience, the women have had to overcome hiccups along the way – not least was the day Emma arrived to feed the worms only to discover the entire farm missing.

Phone calls flew around campus and Tushar asked neighbours if they had seen the worm farm.

Finally, they established someone had borrowed it temporarily to show others interested in worm farming.

“It was quite the scandal,” Jennie says, with another smile. 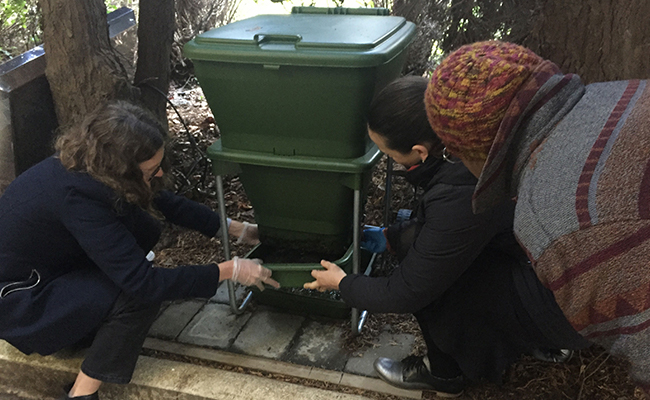 Harvesting worm castings from their worm farm on the Dunedin campus are (from left) Emma Brooks, Jennie Henderson, and Tushar Robins.

And there were the times mandarin skins kept appearing in the farm – worms do not like citrus.

The women thought it was someone trying to help, so they popped a sign inside the worm farm asking people not to feed the worms but inviting them to contact Jennie if they want to get involved.

No-one has yet, but the mandarin skins have not made another appearance.

Emma says all food is recorded on a spread sheet, and Tushar says that is so the Sustainability Office knows how much food a farm needs.

Donna says the food scraps are collected in the Clocktower’s ground floor kitchen, where a bin is provided for anyone wanting to contribute, along with a sign about the worms’ dietary requirements, and a chopping board and knife to cut up the scraps so they are easier for the worms to process into castings.

Tushar says it is exciting that food scraps now go into the worm farm instead of a landfill.

Jennie says that is particularly good because landfills are compacted so food scraps often do not have access to oxygen and break down anaerobically, producing the greenhouse gas methane, which contributes to global warming.

The women have felt very supported on their worm farm journey.

The Sustainability Office supplied the Hungry Bins and worms then worked with the Property Services Division to find a suitable spot nearby, out of the sun so it wouldn’t overheat.

The Sustainability Office also employs Finn Boyle to check all campus worm farms regularly to help if anything is not working – he pointed out some mould then let the women know how to get rid of it.

Jennie says while people put a lot into starting the worm farm, it is relatively low care once operational.

Donna now knows why the worm farm she tried at home did not work, so will have another go.

Emma now knows little things can make a difference and that worm farms work faster than composting, so is thinking of getting a worm farm at home too.

Tushar has enjoyed getting to know the others better, learning more about sustainability, and thinking about what they can do next.

Jennie says because the worm farm created the foundations, they are now putting together plans for more sustainability activities: “We bonded over worms”.

They also hope to eventually add more worm farms to the Clocktower worm farm project and roll out the collection of organic material to feed the worms more offices. Anyone who is interested is welcome to contact Jennie.

Grateful worm farmers have dubbed Finn the worm whisperer. He says that “the joke title” evolved over the past few years but his ultimate aim is for people to know enough to care for the farms alone – “it’s sustainability of knowledge and skill, not just ecology”.

When Finn is checking the farms, his senses spot trouble:

Adding fibre fixes most problems – chopped or scrunched up paper towels are particularly good at soaking up moisture and creating spaces between food scraps so oxygen can flow through, but scattering dead leaves, chopped up cardboard and vegetable stalks also works.

Finn says worm farms not only reduce the carbon footprint but have a wonderful “handprint,” – actions that have a positive effect on the planet – by replenishing the soil and connecting people to place and landscape.

If you think your area can adopt a happy family of worms, please contact the Sustainability Office.