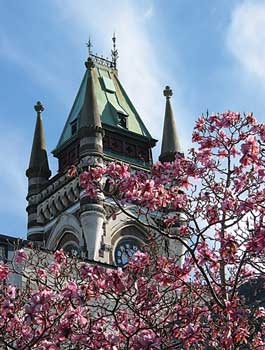 The majestic Clocktower building was designed by Maxwell Bury in the gothic style and constructed of bluestone with Oamaru stone facings.

The first section of the building was completed in 1879, ending just to the south of the main foyer in which you are now standing.

The foyer floor is still laid with the original 1879 tiles and the stained glass windows above the main staircase feature shields of arms commemorating early members of the University’s governing body, the Council.

The University was founded in 1869 and classes began in 1871 on a site in Princes Street now occupied by John Wickliffe House (on the corner of Princes, Rattray and Water Streets).
In 1879 the University moved to its present site, which had previously been occupied by the city’s botanic garden.

Records indicate that botanists were happy to vacate the boggy riverside site for the garden’s present location to the north.

In 1912 the Hon Richard Oliver’s widow gave £2,000 to the University in accordance with her husband’s wishes.

This, together with a government subsidy, enabled the Oliver wing of the Clocktower building to be completed in 1913.

Richard Oliver (1830-1910) represented the City of Dunedin electorate in the House of Representatives, was a member of the Legislative Council and held various Cabinet posts.

His portrait by Molly Sale (the daughter of George Sale, one of the University’s four founding professors) hangs in this foyer.

The southern-most section of the building was added in 1922 to house the Department of Physics.

Directions to next location

Javascript needs to be enabled for the Google Map to function.