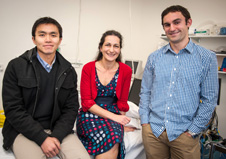 The University of Otago, Wellington (UOW) will soon house New Zealand’s first advanced human environmental chamber – an airtight room designed to simulate some of the more inhospitable conditions found in the world.

The University’s Equipment Advisory Committee approved $400,000 funding for UOW’s Centre for Translational Physiology (CTP) to purchase the chamber in response to a collaborative application supported by UOW departments, departments within the Dunedin and Christchurch campuses, and existing and potential external collaborators such as CCDHB, Massey University, NIWA, the Medical Research Institute of New Zealand, and the New Zealand Defence Force. UOW has provided a further $40,000.

CTP Director Dr Shieak Tzeng says a similar chamber on the Dunedin campus controls heat and humidity, but the UOW chamber will also control pollutant exposure and altitude conditions up to 5000m. It will also function as a whole body calorimeter.

Collective input into the funding application from the different users sealed the application’s success, Shieak says.

“This is a hugely exciting development for the campus, and is just reward for the enthusiam UOW researchers and upper management have shown towards developing our research infrastructure.”

CTP Manager Terry O’Donnell says renovations to make space for the chamber are due to start at the end of the year, and installation of the chamber is set to begin early in 2015.

Already, the Wellington Hurricanes and Triathlon New Zealand have expressed interest in accessing the chamber for exposing athletes to hypoxic (altitude) training, temperature and humidity acclimatisation, and physical performance assessments across a range of environmental conditions, Terry says.

However, it is the opportunity to help foster and develop high quality research, and enhance collaboration both internally and externally that the CTP is particularly excited about, he says.

“Internal researchers will be given preferential use of the chamber, and we want to encourage everyone to explore ways in which it can enhance their existing and future research endeavours.”

The chamber will also enable UOW students to access interdisciplinary research opportunities not available on other university campuses, and which draw on existing strengths and expertise of UOW academic and national and international collaborators, Terry says.

Research projects that are already planning to use the chamber include those looking at the effects of cold and hot air exposure on airway function, the safety of air travel for term and pre-term infants, altitude training as a way of maximising performance of professional rugby players, and energy-expenditure of different ethnicities and implications of this for the country’s obesity epidemic.

Terry encourages people to start building the chamber use in to their grant applications now. For more information or to discuss ideas, contact terry.odonnell@otago.ac.nz.