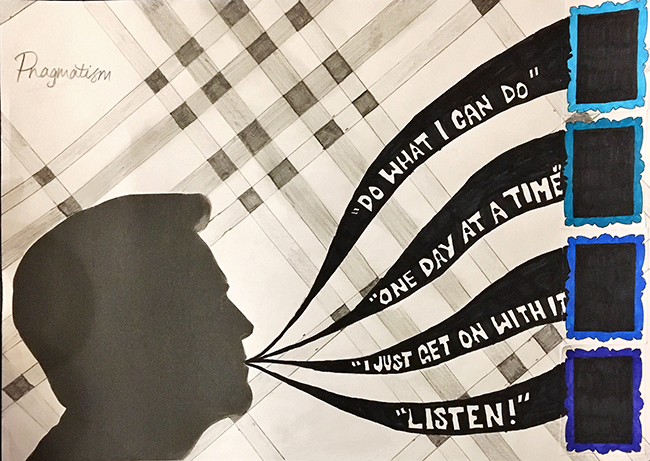 I have chosen a static image to portray the interaction I had with Mr Z. A man of few words was an understatement, but he was wonderfully warm and divulged anything we asked of him. ... It was clear that he had comitted to us his time to do what he could in his last days, to educate. My image represents multiple aspects of his life after the diagnosis of terminal cancer. The colour blue was used ..to represent calmness. Mr Z was very calm and talked to us with humanity. His calmness was suprising to me as I expected some sort of emotions to show... The quotes are from the conversation. They represent Pragmatism and this to me, was the most admirable and memorable part of Mr Z’s story. It made me feel as though I could learn greatly from him, considering situations where all I can do is follow Mr Z’s lead and be pragmatic, both in my personal and professional life. This pragmatism shows great courage and I think that is a testament to Mr Z’s personality.