The cat’s out of the bag 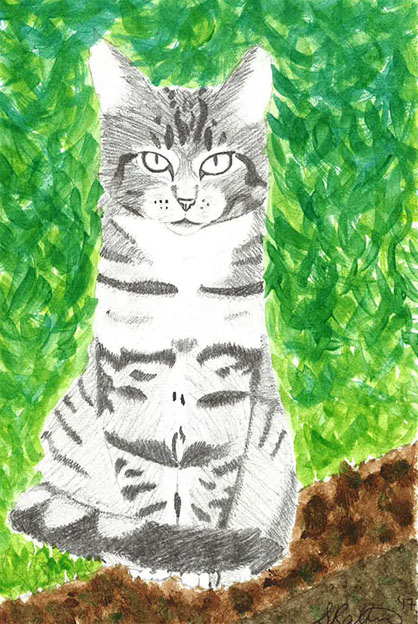 I chose draw a cat because my patient had been revived eight times. To me this meant that he must be on to his last life as he has now been referred to hospice. Another reason I chose a cat, rather than any other object or animal was because, to me, cats always seem to be thinking and experiencing – the mental health of my patient was most certainly intact. Aside from the puffing from walking up the stairs, he struck me as a relatively well old man; there were a lot of stairs after all. This is when I realized I had been expecting to be visiting someone who was bed bound and hooked up to wires and lines hanging at various angles from around the bed. I was expecting someone who struggled to get words out; someone who got lost mid-sentence and would proceed to talk anyway. I was pleasantly surprised. When we asked him to tell us a bit about himself, he started with where he had lived and which job he had been in - all while trying to recover his breath, but he didn’t let that stop him from talking a majority of the interview; we barely got a word in sideways! - Immediately following this, he told us that he had been revived a total of eight times. As soon as I heard this figure, a cat popped to mind. They, too, have 9 lives – that meant our patient had only one left, and there we were sharing it with him.