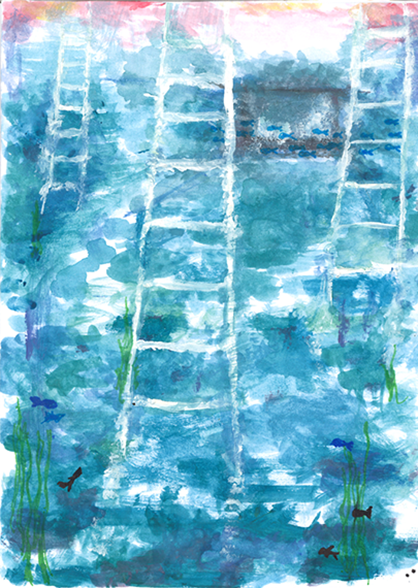 I chose visual artwork as the form of media for my reflective response as I wanted to use colour and it felt more natural to convey a response in a more abstract picture and I didn’t think my response would be reflected in a textual medium as well. Bright colours instead of dark greys which could be associated with death or mourning were used as the impression I got from this patient was that he was past the stage of feeling sorry or sad for his situation. He was focussed on the things that were positive in his life- that he was able to do work from home and spend time with his family and friends and go out into the city.

The white ladders are a symbol of things scattered throughout his life that he has to tackle with difficulty. But like the water supports him in the pool his family helps him with these everyday tasks and the hard times. There isn’t just one ladder to symbolise that he is not alone in this journey. He has a family who live with him and support him and friends who support him as well as his other carers. Wherever he is going next, it is a step forwards to peace for him at the end of his life and somewhere he is now going more willingly. It isn’t totally clear what life will be like afterwards when he leaves the water, but it is not a dark and scary place.