The Art of Palliative Medicine - 2017 Semester 2 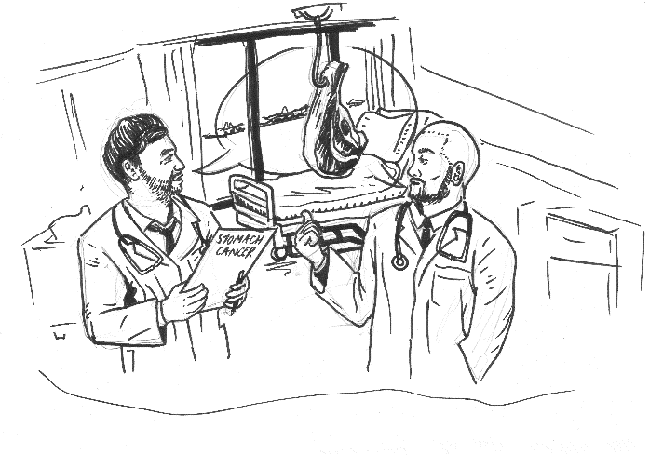 Given my capabilities and resources on hand, I found the best way to portray my thoughts of how the patient felt through his journey is through a drawing. It was also the best way that I felt would describe my patient in relation to the health sector and how him and many others have felt with their diagnosis and are left in the dark.

I have tried to communicate the thought of which my patient said he felt throughout his rough stay in hospital. He described to me as if he was 'a piece of meat, where doctors would roll up, pull out a card saying stomach cancer, and they would walk on like it’s another one ticked off their list'. He said he was barely told what was going on or what needed to be done, he felt like he was being disregarded like a bad meat and at a meat works, ready to be thrown out. He went on to say that he had to stop doctors in order to ask them what is happening instead of them including him in the conversation. I have tried to portray this idea with doctors ignoring the patient and rather reviewing them as a 'meat', or in more sense as a 'case', rather than a person with feeling, who has no control on what is going on.