The Art of Palliative Medicine - 2016 Semester 2 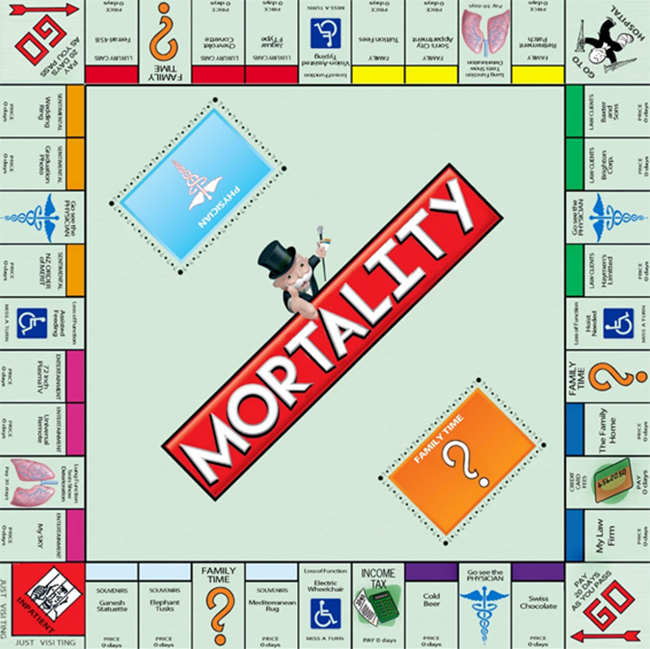 Patient’s experiences can be very different from medical knowledge. A medical student armed with a textbook might expect to find the man we visited in a dejected and defeated state given his prognosis. But he is not bitter or regretful about the fate he had been dealt. Our talk revealed that he is happy for the good life lived.

The board-game medium encapsulates this attitude. Although my personal attitude towards death is one of fear and angst, this man seems to trivialise its importance. This is why I attempted to trivialise death by spoofing Monopoly as “Mortality”. When I finished Photoshopping the logo, I was somewhat uneasy at having the idea of death juxtaposed on ‘fun and games’. And I remembered that I also had mixed feelings during the interview. The inner medical student wanted to cry and express my deepest condolences. But this (ironically) was not the empathic thing to do. This man did not see himself as a victim. He did not want anybody to sulk or feel sorry for him. He worries that his wife worries too much about him, and would rather her go enjoy herself and spend time with friends. So in keeping with his tone, the interview ended up being much more informal and jovial than we might expect for an end-of-life discussion. Part of me felt quite uncomfortable being like this, but I was certain it was the right thing to do.