The Art of Palliative Medicine - 2018 Semester 1 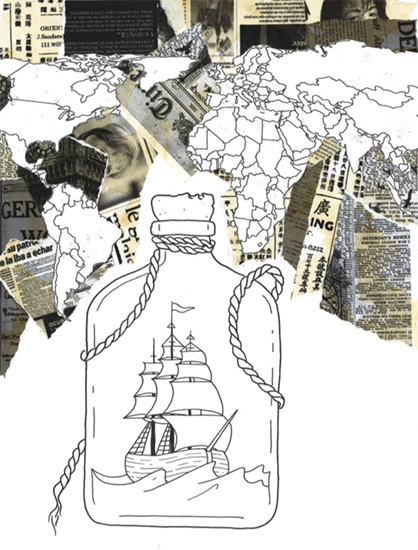 I chose to draw as I love drawing and it has been a long-standing hobby since I was very young.

The ship represents his time spent as a sailor. The ship is in a bottle to symbolize how this journey has come to an end and have now become memories. Similar to how some people keep ships in bottles as a hobby and then keep them on the shelf to revisit and look at now and again, this is the same idea for the person we saw – he revisits these moments of his life too. The seas drawn in the bottle are slightly turbulent to show how it hasn’t been smooth sailing for him throughout his life but that never really threw him especially given his resilience.

The map of the world remains outside of the bottle, which is shut, to show that the world still carries on around him while he is now confined to the space of his home. The rope around the bottle shows that he now has very limited, if not completely cut-off, connections to the outer world.

Overall the artwork symbolizes how a man once free to roam the world is now limited by illness and disease yet his adventurous and strong personality remains. Although he is no longer independent now, he still has the memories of times passed.