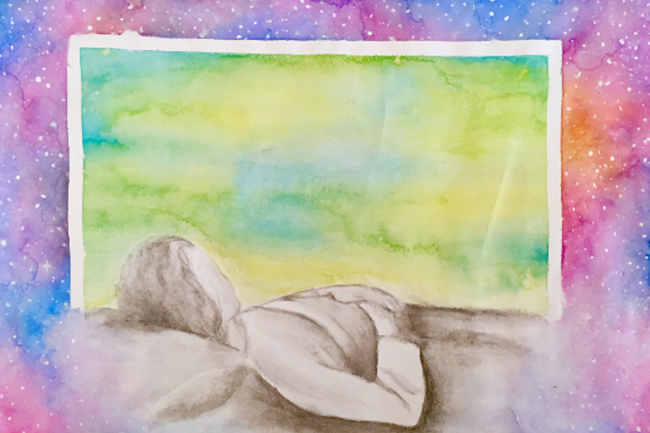 My creative piece reflects the talk my partner and I had with the woman we visited. I chose to do a drawing using watercolour pencils as I had never really used watercolour pencils before, and thought it would be a good medium to convey the fluid washy effect of life. The greatest struggle for this woman, and many others in palliative care, is the loss of independence. She described feeling like life was passing her by. She misses many aspects of her life such as her previous jobs, socialising, dancing and travelling. To express this, my drawing shows her looking out a window, seeing the hues of blues and greens passing by. I chose these colours as they are the colours of the Earth as seen from space, representing "life" here as they streak past the window. On the outside of the window, I drew the galaxy to represent how her "universe" and all that she is now able to do is largely confined within the walls of her home. This woman no longer has the freedom to go out as much as she used to, and this has had a large impact on her. Overall, I attempted to stir emotion in the viewer with the black and white solemn lady in bed, while keeping the rest of the piece colourful to convey that palliative care is not only about acknowledging death but also celebrating life.