Count Me a Chance 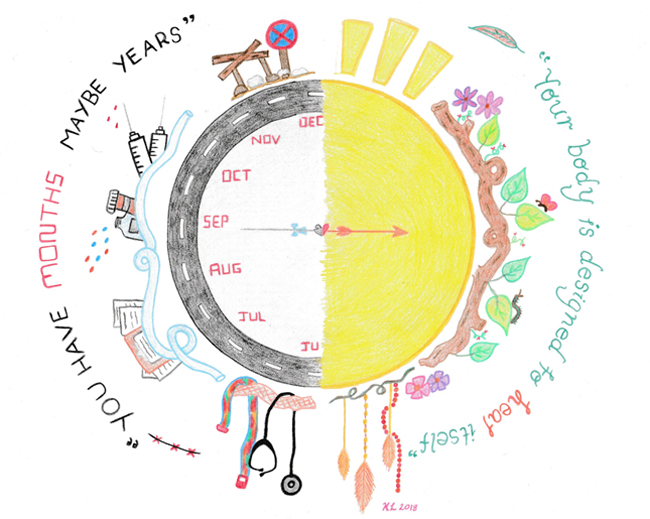 Count me a chance illustrates the dichotomy between the protocol-driven system of Western medicine and that of the woman we interviewed who contrasted the idea of the body and natural world being designed to heal and repair itself. She consistently emphasised her struggle and effort with trying to balance the recommendations and demands of Western medicine with her own beliefs of what her body needed to heal. She felt medicine should be more patient-serving and holistic in its approach to treatment and recovery.

One side of the image represents the structure of Western medicine. It shows half a clock face where the numbers have been replaced by months in illustration of the idea of limited remaining time, with hours becoming the relative time of months. It visualises the surrounding text “you have months maybe years”; which she found a narrow analysis and unhelpful. The clock frame illustrates a visual representation of “the road to death” and is surrounded by common Western medical resources.

The other side of the image represents her naturalist world view and the elements she identified as being important to her healing. It shows the sun as a natural time-keeper in contrast to the Western clock-face, and is surrounded by elements of nature. It is a visual support to her words “your body is designed to heal itself”; a phrase she used in elaboration of and explanation to your body needing exposure to the basic fundamental life forces such as the sun, wind, rain, nature, and the elements in order to heal; in priority over and in prerequisite to Western medical intervention.