The Life and Death Collection 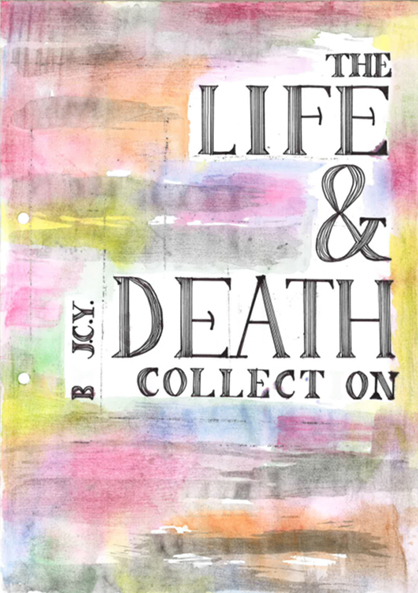 I had the idea to design a clothing line initially out of a desire to create a practical form of visual art and that she mentioned that she made her own clothes when she was young. Before we were allowed to go in to see our patient, we had to wait several minutes while she did her makeup for the day. Clothing is a part of everybody’s life; it acts as a most visible and accessible form of self-expression, and can reflect our personality, beliefs and values. It follows then that representing this woman’s story in clothes makes it all the more far-reaching and comprehensible for a wide audience. Each carefully crafted outfit is a depiction of an important aspect of life and/or death.

Youthful Woman represents the fondness with which one looks back on the days of being in their prime – the things that gave them joy, the memories that were created and even the regular aspects of life that may have taken for granted. Family Woman is about the accomplishment that comes with finding love and raising children and grandchildren, something that can be a cornerstone to a happy, fulfilled life. Independent Woman deals with not only independence as a healthy person but also throughout the illness journey, when often the patient’s goal is to preserve their ability to carry out tasks on their own wherever possible, and minimise disability. Organised Woman illustrates the importance of acceptance of death and the consequential capacity to die on one’s own terms. Comfortable Woman, is a clear metaphorical depiction of the aims of palliative care – that is, to minimise pain so that the patient can focus their last moments on things that matter. Dignified Woman reflects that appearance does not become insignificant to the dyin; the patient needs to know that they will be remembered as they wish. Grieving Woman is a normalization of the grief process for patients and their family, surrounding both the illness and death itself. Memorable Woman shows the patient being remembered how they wished to be remembered – in a positive light that reflects who they were as a person – and offers the comforting message that we don’t necessarily cease to exist after we die. 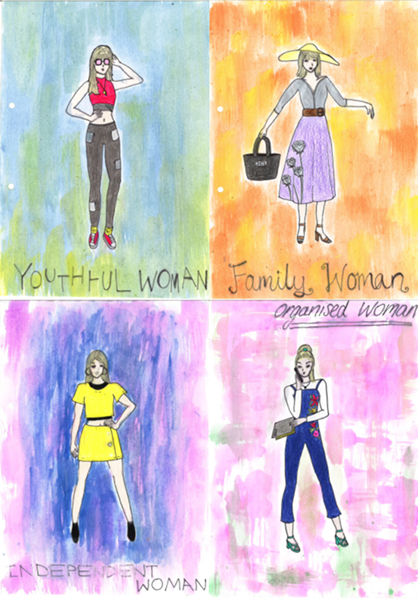 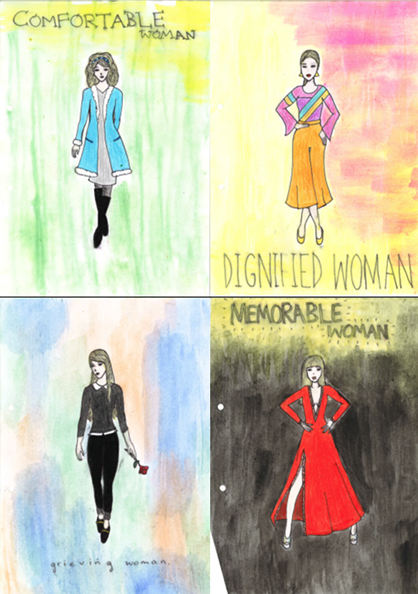