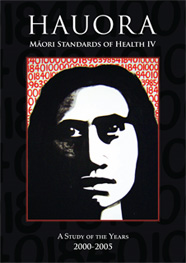 Hauora: Māori Standards of Health IV, published in November 2007, is the latest edition in the Hauora series, and covers the period 2000 to 2005. The first three chapters situate the health statistics within the broader context, including the theoretical, demographic and socioeconomic contexts. This is followed by chapters on mortality, public hospitalisations, cancer and mental health. This volume of Hauora also includes a number of topic-based chapters from invited authors, including chapters on cardiovascular disease; diabetes; respiratory disease; oral health; disability; sleep problems; occupational safety and health; health in prisons; and the National Primary Medical Care Survey.

Hauora: Māori Standards of Health IV was funded by the Ministry of Health and the Health Research Council.

This publication is available in PDF format below. It can be downloaded as a whole book or as individual chapters.

How to read tables and graphs

Segi and WHO standard population tables

The first volume of Hauora was authored by Eru Pomare and published in 1980. It profiled patterns of mortality for Māori and non-Māori for the 20-year period from 1955 to 1975. This volume drew attention to the fact that incidence and mortality from most of the common amenable diseases in this country were still appreciably higher among Māori compared with non-Māori.

Hauora: Māori Standards of Health II was authored by Gail de Boer and Eru Pomare, and was published in 1988. This second volume of Hauora included analysis for the years 1970 to 1984, and found that morbidity and mortality continued to be higher for Māori than for non-Māori. In addition, the Treaty of Waitangi, Māori concepts of health, and socioeconomic factors were considered as important influences on health.

The website is a collaboration between Massey University’s Centre for Public Health Research, Te Kete Hauora, the Ministry of Health’s Māori Health Business Unit and Te Rōpū Rangahau Hauora a Eru Pōmare. It aims to become a repository for public health data from a wide range of organisations, via a series of interactive maps. The site provides data at DHB levels and in some cases presents time series charts.