The measurement, evaluation or observation of outdoor smoking and smokefree signage

This is a collection of methods and results from research on the extent of smoking, signage, butts, and tobacco smoke pollution. 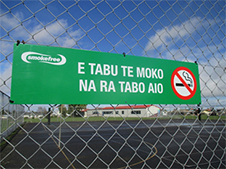 Gurram N, Thomson G. The point prevalence of smoking and vaping in downtown locations in Wellington: Report for the Wellington City Council on observations in November 2018. Wellington: University of Otago Wellington, November 29, 2018

In a 2011 study, being within metres of smoking on the street was associated with higher air pollution levels than being adjacent to busy road traffic. Smokefree policies for city streets could protect the health of pedestrians who are currently unable to avoid exposure to tobacco smoke pollution.

In March 2010, smoking was observed along a route of major shopping streets in central Wellington during Tuesday, Friday and Saturday of a single week. In 21 hours, 932 smokers were observed (seven smokers every ten minutes).

A 2008 observational study of smoking in 12 outdoor public places in central Toronto found that 37% of smoking occurred within 9 metres of building entrances. Mean particulate (PM2.5) levels were significantly associated with both the occurrence of smoking and the number of lit cigarettes.

A 2010 review suggests that ‘Because of repeated and cumulative exposure to SHS in outdoor settings like beer gardens and outdoor eating areas, occupational exposures to PM2.5 from SHS are likely to be far higher than those experienced by patrons who are present for far shorter periods. …. It is thus plausible that occupational exposure to PM2.5 in outdoor work settings where smoking is allowed could exceed the Australian National Environment Protection Measure for Ambient Air Quality benchmark annual average target of 8μg/m3 .’