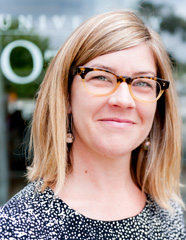 Amber is a health geographer with a focus on social justice and understanding the unexpected tenacity, adaptability and resilience of the underprivileged. She has worked on research topics including socioeconomic contributors to health in poor and wealthy countries, drinking water, health inequalities and aspects of the built, physical and social environments which bolster health despite high levels of poverty.

Pearson AL, Ivory V, Breetzke G, and Lovasi GS, " Are feelings of peace or depression the drivers of the relationship between neighbourhood social fragmentation and mental health in Aotearoa/New Zealand?” Health & Place. 2014; 26: 1-6

Breetzke G and Pearson AL, “The fear factor: Examining the spatial variability of recorded crime on the fear of crime.” Applied Geographer. 2014; 46:45-52.

Kingham S, Pattison W, Pearson AL, Longley I, Campbell M, and Apparicio P, "The use of a land use regression model to predict NO2 air pollution in two small areas of Auckland." Air Quality and Climate Change. 2013;47(3): 40-44.

Pearson AL, Griffin E, Davies A and Kingham S, “An ecological study of the relationship between socioeconomic isolation and mental health in the most deprived areas in Auckland, New Zealand.” Health and Place. 2013; 19: 159-166.

van der Deen FS, Pearson AL, Wilson N. (2014) A paradox: Limiting tobacco retail to “pharmacies only” could be part of the tobacco endgame. Journal of American Medical Association (in press).

Pearson AL. (2010) “Vulnerability of Port of Seattle Assets to Flooding from Sea-Level Rise and Storm Events Related to Climate Change” a report for the Port of Seattle, Seattle, USA.