Hauora Māori – latest developments is an innovative programme for experienced public health practitioners who need to extend their knowledge, skills and experience in Māori public health. It is also suitable for those new to Māori public health who want to experience some of the key issues and challenges facing Māori and public health kaupapa in the 21st century. This programme will be delivered as conversational style sessions with 30-minute presentation and facilitated discussion between speakers and those in attendance. Emphasis is given to the latest developments in addressing health inequities through Treaty activism and law; who the ‘public’ are and need to be in Māori public health discourse; understanding the foundational values of Hauora Māori to inform our practices; Māori and indigenous sovereignty in the 21st century; data sovereignty; resistance movements in the Pacific; challenges to state control over Māori children. The programme ends with a specific focus in developing the skills of practitioners/students and anyone engaged in working with Māori, whānau, hapū and iwi including examining our own ‘implicit biases’ and assumptions we unknowingly make in our work as well as decolonisation and re-indigenization of our practices.

The day ends with a community based event on working to address violence in our communities with international keynote and distinguished guests Marai Larasi, OBE, Founder and Director of Imkaan, UK-based human rights organisation that supports thousands of black and minority ethnic women’s groups (BME) to end violence against women and girls (VAWG), Usufonoimanū Pesetā Betty Siō who has a long and distinguished role of establishing family violence prevention organisations in Pasifika communities of Aotearoa for over thirty years; and Dr Keri Lawson-Te Aho, lead author of the Mauriora Framework for the prevention of whānau violence. The evening event will be posted in community forums and all registrants for summer school will receive advice of the venue by email.

The entire emphasis of this course is designed to support and equip you to become more effective public health practitioners by considering the larger social justice framing of issues afflicting Māori communities, whānau, hapū and iwi. This includes some of the more controversial issues and challenges faced in public health professional practice in a supportive and non-threatening environment.

In this course, you will hear from leading experts in Māori speak about the latest developments in Hauora Māori. The local, national, regional and international landscape of indigenous public health is changing . You will have opportunity to discuss and debate issues and to meet with speakers during break times. This course is designed to be interactive.

The course is designed for staff in Māori health organisations and services, Māori health units in District Health Boards and those with responsibility for Māori health programmes and services, public health units, non-government health organisations policy analysts and advisors, local government and social justice advocates. University students would also benefit from this introduction to Māori public health especially if studying in health sciences, psychology, Māori and related subjects that have Māori wellbeing and social justice as the focus. Iwi, hapū and whānau members would also benefit from this course.

By the end of this course participants should have knowledge of:
Critical foundations of Hauora Māori, the current political landscape within which we practice and impacts of national, regional and global activism, data sovereignty, critical issues of whanau versus state control of tamariki Māori;

And
Critical and improved skills concerning mindfulness, political awareness, self-reflection and critical self-appraisal of our professional public health practices with Māori and other indigenous and minority populations. 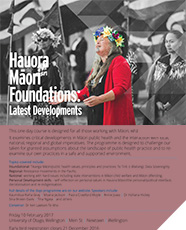 Register for this course