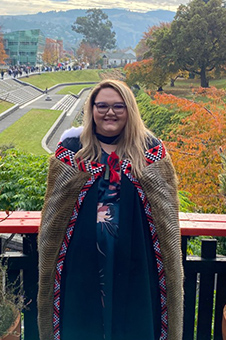 I initially completed a Bachelor of Science majoring in Anatomy. I enjoyed learning about the gross and microscopic anatomy of the human body through the hands-on lab work – it was a great way to learn.

I realised I wanted to work within the health sector, helping people, so I decided to follow up my BSc with a degree in Radiation Therapy, which is the perfect combination of technology, science, anatomy and patient care – all the things I’m passionate about.

The second and third years of the programme are a combination of theory and clinical placement in a hospital. This allowed me to apply theoretical knowledge and develop the various skills required to be a qualified radiation therapist. The course also prepared me to help people of different backgrounds and cultures by immersing me in clinical settings.

Through my interactions with patients, I learnt the skills required to ensure equitable care for everyone.

As my first degree was Dunedin-based and the second was in Wellington, I was lucky enough to experience the student culture of Dunedin as well as the busy city that Wellington is.

Throughout my entire university experience, a highlight has been the people I’ve met. It was easy to find and connect with people with similar interests and I’ve made lifelong friendships. 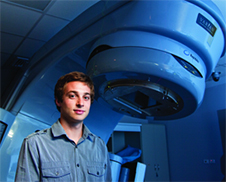 Because the last two years of Otago’s Radiation Therapy degree is evenly split between theory and practical, Dean felt fully prepared once he graduated ...

Even in a hospital environment, there are few professionals who are able to see as many lives saved as a result of their work as radiation therapists.

One year after graduating with his Bachelor of Health Science, majoring in Radiation Therapy, Dean Paterson is working as a radiation therapist at the Wellington Blood and Cancer Centre, planning and delivering radiation treatments mostly for cancer patients. He describes the work as “immensely satisfying”.

“Perhaps the best thing about this job is the level of rapport that you're able to establish with the patients,” he says. “They are often coming in from Monday to Friday for seven weeks, which means that you can get to know each other in a way that's closer than is possible for most other health professionals.”

And because the last two years of the University of Otago's Radiation Therapy degree is evenly split between theory and practical, on-the-job experience, Dean says he felt fully prepared for the work once he graduated, having already established a good working relationship with his colleagues at the Blood and Cancer Centre.

“Otago was a great environment in which to study,” he says. “In addition to the professional experience you gain, the small classes mean that you get to know your lecturers and fellow students really well and the lecturers are always very approachable.”

Dean is eager to dispel the myth that working with seriously ill patients is “depressing” or difficult. “A lot of our patients really enjoy coming in and knowing they're getting the best available treatment for their condition,” he says. “Most of them are just going about their normal lives, working, enjoying their hobbies and trying to get better.” 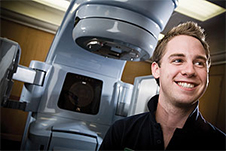 “It's satisfying work,” he says. “I can branch out and up. I have job security, but I can travel, too.”

One of the best features of the three-year radiation therapy course, says Logan, is the “great mix of theory and practice”.

“Half the time is spent in class, the other half in the clinical environment,” he explains. This meant the skills he learned in study transferred straight into his work. Logan adds that during this time, he really appreciated “the great support in the hospital and from the academic staff at the Wellington campus”.

Now, says Logan, “I can work pretty much anywhere in the world – the qualification is very highly regarded.”

But although he can travel wherever he wants, after three years at Dunedin, Logan says he still “likes the mix of people and technology, and the fact there's always something different to do”. This includes working closely with the radiation oncologist (the specialist doctor) to mark up, plan and deliver appropriate treatment.

“It can be challenging, dealing with families, and their emotions,” he acknowledges. “But it comes with the great satisfaction of knowing I am helping my patients in some way.” 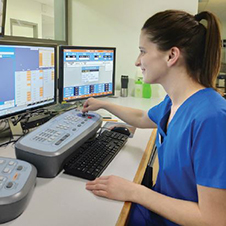 Studying Radiation Therapy (RT) at the Wellington campus of the University of Otago opened the door to an overseas career for graduate Jennifer Ransley. Currently working as a radiation therapist in Dublin, Jennifer is making the most of her close proximity to the rest of Europe, regularly meeting up and travelling with former classmates who are also based on that side of the world.

Having always been interested in a career within the health sector, Jennifer says she was attracted to the technological side of the radiation profession, as well as the opportunity to make a positive difference in people's lives.

“Patients come for treatment daily, often for as long as seven weeks. Not only do we treat their cancer, we frequently form close rapports with people from all walks of life.”

Clinical placements make up a large component of the RT programme.

“These placements prepare you well for life after being a student. You really do become immersed in what is soon to be your workforce, working alongside people who are eventually going to be your colleagues.”

“The course is intense and is a big commitment but having worked as a radiation therapist for a number of years, the University really puts you in the best possible position when transitioning from a student to a qualified radiation therapist. The lecturers are interested in seeing you succeed and help is there when you need it.”

“Wellington is a brilliant city to study in. With the class being small, you become a really tight-knit community, supporting each other along the way and forming lifelong friendships.” 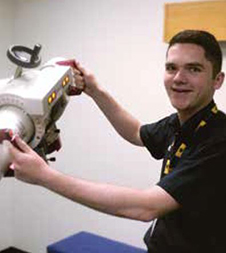 “I've always had a passion to work in healthcare, and an interest in technology, so naturally my attention was drawn”, he says.

After researching more about Otago's Radiation Therapy programme, James realised it was the right choice for him. The following year he moved to Wellington to study RT.

“I've had plenty of opportunities to gain handson experience with patients in a supportive environment, which ultimately enabled me to go through the transition of putting the academic concepts learnt in the classroom, into practice”, he says.

He's now planning to travel to Italy to attend the European Society for Radiotherapy and Oncology International Conference (ESTRO), and is considering future postgraduate study – to develop both clinically and academically.

Reflecting on how his life's changed since attending that seminar in Dunedin, James also points out his newfound attention to detail. “Due to the nature of radiation, we work to millimetre accuracy in all that we do, so it's pivotal to have an eye for detail. Now in my out-of-work life I am conscious of things being spot-on accurate – which has all developed since training and working!”