Professor Brett Delahunt’s exceptional, long-standing voluntary service and leadership to cancer research has been acknowledged by the Cancer Society of New Zealand.

He received the Meritorious Service Award in recognition of the voluntary hours he dedicated to fostering the Cancer Society’s goals in cancer research. His service with the organisation has spanned twenty years.

Brett is the Chair of the National Scientific Advisory Committee, and Professor of Pathology and Molecular Medicine at the Wellington School of Medicine and Health Sciences, University of Otago.

The Cancer Society’s National President, Peter Hutchison, presented Brett with the highest award the Society can bestow on an individual.

“Brett’s commitment and devoted contribution are immensely valuable to the progression of cancer research and we can’t thank him enough.

“We’re recognising an outstanding performance over two decades and we’re thrilled to have him on board for another two years”, Peter said.

Brett joined the National Scientific Advisory Committee of the Cancer Society of New Zealand in 1996 and became chair in 2001. Among his many academic awards, he is regarded as one of the society’s most valued humanitarians, devoting on average over 100 hours of voluntary service each year.

Brett says the strides made in cancer research could not be done without his team, he credits the individuals of the National Scientific Advisory Committee for their work and contribution.

“It would be remiss of me to not acknowledge the many people who have been there for years, who are completely reliable with respect to the work that they do. I’m very happy to be a part of the team, and I’m very happy to accept this honour.

“You get to really understand how there’s a huge commitment amongst the scientific community in New Zealand in pursuit of cancer research, and facilitating the research environment is the contribution that an academic must make.

“There have been many great projects that have been funded through the Cancer Society that have gone on to better things.” 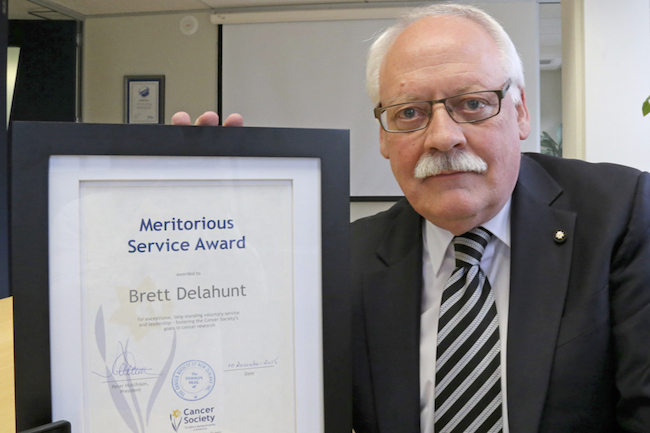