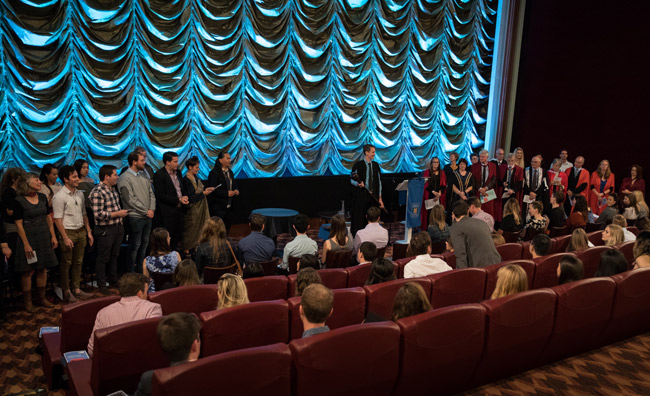 Top-ranking medical and radiation therapy students enjoyed their own version of the red carpet at the University’s Wellington campus 2017 Awards Ceremony at the Roxy Theatre last month.

Those gathered were treated to the highlights of the year – the campus’ strengthened relationships with local iwi and district health boards, its growing trans-Tasman connection on the radiation therapy front, the debating prowess of its students on political issues such as organ donation and the future of health, the significant numbers of Māori and Pacific students (75 and 41 respectively out of a total of 825 students), and academic and research achievements across the campus.

Nearly 50 awards were presented, about 10 for each category of students – fourth-, fifth- and sixth-year medical students, radiation therapy students and postgraduates.

For many of those gathered, it was the more pragmatic speeches that made an impact – on luck and obligation, on resilience in the face of a demanding career, and on fleeting time.

"... the one thing that we are counting on is that you will make the world a better place."

Vice-Chancellor Professor Harlene Hayne reminded students that “as young people, living and educated in New Zealand, you don’t know how lucky you are.”

She told the students that with all this luck comes a little obligation and "the one thing that we are counting on is that you will make the world a better place."

Some would do that through their professional health practice, Professor Hayne said, and others through research – helping find solutions to health issues such as malaria and AIDS, injuries caused by violence, disabilities related to alcohol dependence, and depression.

Dean and Head of the Wellington Campus Professor Sunny Collings focused on resilience. She gave the audience of undergraduate and postgraduate students a four-point guide on how to find “joy and meaning in your professional life when significant demands are being made on your energy and time.”

It comprised: look after yourself; stay connected; give to/nurture others; and celebrate.

Meanwhile, sixth-year medical student Daymen Huband urged his fellow students to treasure the time they had, to stop wasting time “connected to a screen worrying about what others are doing”, and challenged them to once or twice a week “leave their phones at the front door so they could interact undistracted with their friends, family or partner”.

“Through my work in the ambulance service and experiences on wards I have seen too many people wishing that they had more time,” he said. “I have come to realise that time is the one thing we can never have more of.”

The ceremony ended on a high note, with singing by Wellington’s staff and student waiata group.