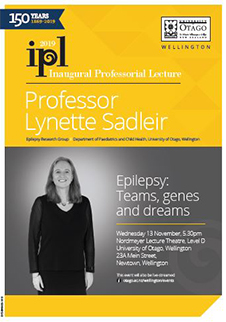 Please join us for this Inaugural Professorial Lecture by Professor Lynette Sadleir of the Department of Medicine, University of Otago, Wellington.

In her clinical role as a paediatric epileptologist, Lynette diagnoses and manages children with epilepsy. She is a physician scientist with expertise in epilepsy phenotyping and epilepsy genetics. Epilepsy is the most common serious neurological illness of children affecting nearly 50 million people world-wide.

Lynette’s research, combining international collaborations with physicians and laboratory scientists, has led to the discovery that the majority of epilepsy is caused by abnormalities in genes. Although it is known what these abnormalities are in some epilepsies, there are still many types of epilepsy for which the genetic change remains elusive.

We would love you to join us in person for this celebratory event, but for those unable to be there, it will be livestreamed.

Please note: Live streaming does not work with Internet Explorer.