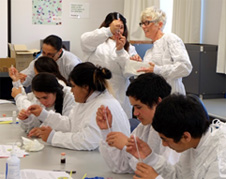 The University of Otago, Wellington (UOW) Department of Pathology and Molecular Medicine recently hosted Te Kura Kaupapa Māori o Ngā Mokopuna for two days of science, in an exciting initiative aimed at exposing year 9 to 13 Kura students to science not usually offered at their school.

Held largely in te reo, the wānanga was a partnership between the Kura and UOW. Students gained NZQA credits, while UOW staff who were involved gained an appreciation of te reo Māori.

The wānanga started with a presentation on Māori astronomy and traditional navigation by Toa Waaka. Dr Sara Filoche (UOW) led the science teaching and experiments, which included exploring the anti-microbial properties of different types of manuka honey. Sara taught in English, while her colleagues Ruruhira Rameka and Shirley Simmonds assisted in te reo.

The experience was inspirational, Sara says.

"It was great to see how science can be delivered in te reo with an experiment that draws on traditional knowledge and scientific technique. Their energy and enthusiasm was wonderful - there was much excitement about getting to wear lab coats and handle chemicals.”

During the two days, students toured UOW’s labs – including the Centre for Translational Physiology - carried out experiments, wrote up their projects in a computer lab, checked on specimens, photographed results, and presented their findings.

Hearing te reo being spoken among the students and staff throughout that time was rewarding, Sara says.

“It was an amazing, collaborative effort, and the student mihi at the end were a touching and heartfelt confirmation that the initiative was a success.”