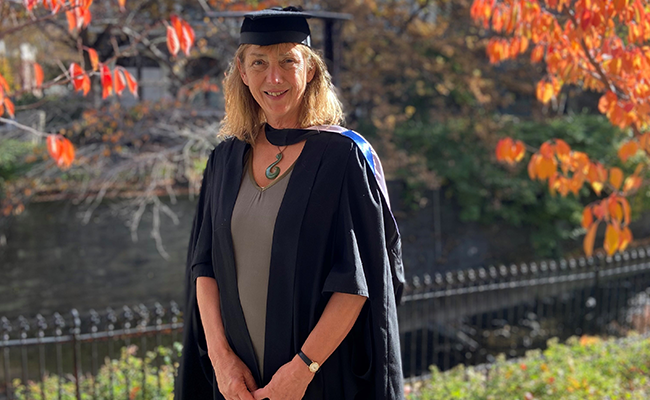 A supportive family and the knowledge that her research would be of value helped Gill Stotter (65) overcome the challenges of returning to academic study later in life while working as a practising physiotherapist and running her own practice in Wellington.

Gill completed her Master of Primary Health Care at the University of Otago, Wellington, at the end of last year, working on it part-time while steering her healthcare practice through the pandemic.

Her thesis explored health professionals’ perceptions of the new advanced physiotherapy scope of practice in New Zealand and looked at the barriers and enablers for its implementation in primary care.

New Zealand is the first country in the world to regulate the scope of an advanced practitioner certification. As a former president of the professional body, Physiotherapy New Zealand, and a member of the Physiotherapy Board committees developing the new scope of practice, Gill had a good understanding of how it could all work in practice.

"The challenges were around getting back into academic writing and learning to use the IT and the library. The University’s study skills workshops were just invaluable because coming back as a mature student and being out of the system for a while, I did find it hard."

Knowing her research findings would be useful helped her stay motivated through her studies.

“Doing this later in life meant I wasn’t doing a master’s just for the sake of doing a master’s,” she says. “I wanted to do a master’s that would actually provide some value and new knowledge and it has done.”

Under the advanced scope of practice, physiotherapists with a master’s degree can apply to become advanced practitioners in specific treatment areas, such as musculoskeletal or neurological physiotherapy, once they reach a sufficient level of experience and competencies.

Gill says the new scope of practice is primarily aimed at improving patient care and healthcare pathways, but it will also offer physiotherapists a career pathway, and could help keep young physiotherapists in the profession.

Her research focused on musculoskeletal management in primary health care and was based on interviews with 15 people, including physiotherapists, general practitioners, medical specialists and ACC case managers.

“Even some of the physiotherapists weren’t really sure what advanced practice would look like, and certainly the other people didn’t have a clue. So, one part of the study was finding a definition of what it would look like and how it could be implemented into practice,” she explains.

The health professionals she spoke to emphasised the importance of advanced practitioners having good communication and relationship building skills, as well as clinical expertise. They also discussed their concerns about the lack of supervision and peer support for physiotherapists working in isolation.

Gill has now developed several recommendations for the profession, including the development of a framework for clinical supervision, based on supportive and non-threatening peer groups.

“It is important now that we get the findings out into the world. There are recommendations there for our professional body, Physiotherapy New Zealand, for our regulatory body, the Physiotherapy Board, and for universities which provide undergraduate and postgraduate qualifications, that mentoring and peer support need to be an accepted part of normal practice.”

Gill trained as a physiotherapist at Queen’s College, Glasgow, in her native Scotland, but because her initial postgraduate study was in the 1980s, she had to first complete a Postgraduate Research Diploma before going on to do her master’s.

Returning to academic study after so long was difficult, she says.

“The challenges were around getting back into academic writing and learning to use the IT and the library. The University’s study skills workshops were just invaluable because coming back as a mature student and being out of the system for a while, I did find it hard. I also had some sessions on academic writing with the librarians, so all the support I had was huge.”

She chose to do her study in the Department of Primary Health Care and General Practice where she could work alongside other health professionals.

“The courses were with general practitioners, pharmacists, paramedics, dietitians and occupational therapists, so it was really broad, and what interested me was that interdisciplinary approach and looking at how could we try to do things differently to improve practice in primary health care.”

“They were superb, they were just very supportive. I think if I hadn’t had them, it would have been harder. It is having that support that makes the difference.”

As a part-time student, Gill took one day off a week from her practice, the Hutt Physiotherapy Centre, to focus on her studies, later increasing this to two days and working at the Wellington campus on both days.

At one point, though, the effort of working and studying, combined with the responsibility of running a business and all the risk management required to keep a health care practice going through the COVID-19 pandemic became overwhelming, and she put her studies on hold temporarily.

Having the support of her family, husband Grant and daughters Hannah (31), Emily (28) and Lucy (25) had made a huge difference, she says.

“I remember when I first went back to studying and had my first assignment and trying to send it in, it virtually gave me a heart attack and they were there to help me.

“And then at the end, they could see how far I’d travelled through all that period of time, being able to write a thesis. The journey from the beginning to the end was a big learning curve in many different aspects, but I learned a lot from it. You also learn a bit about yourself. The lesson is you are never too old. When you do it later on, you bring your life experiences and you bring other skills.”