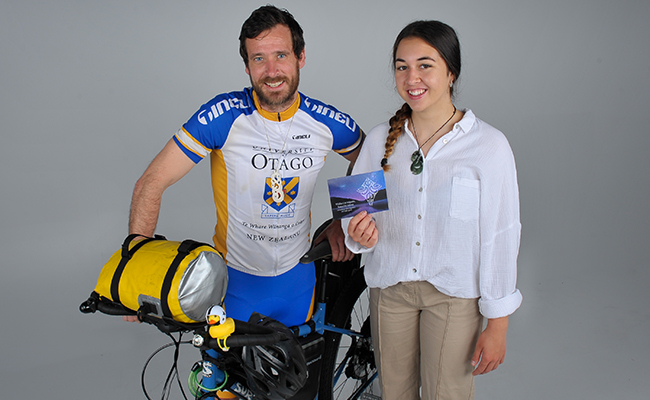 A researcher at the University of Otago, Wellington, will begin an epic 3,000 kilometre cycle ride from Cape Reinga to Bluff in December, chatting to New Zealanders along the way about their mental health and passing on postcards to help them reconnect with friends and whānau.

The trip is both a personal and a professional challenge for Dr Matthew Jenkins, who has been working as a Research Fellow at the Department of Psychological Medicine since 2019, after completing his PhD in Physical Education on the University of Otago’s Dunedin campus.

Dr Jenkins will be accompanied by friend and fellow cycling enthusiast, British engineer Thomas Fearn, who has also been working in Wellington. The pair are expecting to cycle an arduous 120 kilometres a day, as they follow the ‘Tour Aotearoa’ route, up hills, along state highways, on rugged trails, and down the tidal sands of Ninety-Mile Beach.

As he goes, Dr Jenkins will be researching New Zealanders’ views on mental health, and encouraging them to reconnect with others.

“I want to understand how people around the country talk about mental health as well as finding out how they look after their own mental health – do they connect with whānau, do they spend time in nature, are they physically active? These are themes that are really important to me as a researcher and that I am passionate about.”

The interviews and information Dr Jenkins gathers will form part of the first of a series of podcasts he is producing on mental health which will be broadcast on Access Radio next year.

Everyone who agrees to be interviewed for the research project will be given a postcard, which they can use to reconnect with friends and family in New Zealand or overseas.

The art for the postcard was created by a young artist, 16-year-old Paige Wilson (Ngāti Rangi, Ngāti Tūwharetoa), who is the daughter of Kristy Wilson, a Client Services Administrator in the Department of Psychological Medicine.

“It’s a beautiful art work,” Dr Jenkins says. “The amount of thought that Paige has put into it is phenomenal. The line going through the middle of the graphic design represents the journey from the north to the south, and the whakataukī, ‘Waiho i te toipoto, kaua i te toiroa’ (Let us keep close together, not wide apart) is about reconnecting.

“I’m also grateful to the University’s Design Services team who have done a brilliant job of bringing Paige’s design to life.” 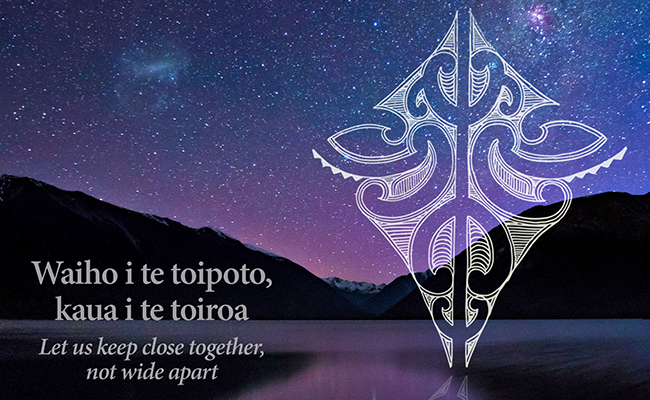 The postcard which will be given to New Zealanders so they can reconnect with family and friends.

The postcards will be ready to post with stamps for mailing within New Zealand or internationally so there are no barriers to prevent people from sending them on.

Dr Jenkins says he loves the idea of people hand writing postcards and sending them to friends or whānau.

“It’s such a nice feeling when you get a postcard in the post, and particularly this year during the COVID-19 pandemic, there are lots of lost connections between people, and this is a way of reconnecting through thoughtful action.”

Cycle touring is not new to Dr Jenkins, who prefers the close connection with nature and the environment and with others that travelling in the open air provides.

Before embarking on his PhD, he had built his own bike and embarked on a journey through Malaysia, Myanmar, Singapore and Thailand, with the aim of continuing to cycle across land back home to Birmingham in the UK. Finding out enroute that he had been accepted to study for his PhD, he abruptly changed plans and jumped on a plane to New Zealand instead.

“Rather than going home, I ended up going to the other side of the world, to Dunedin, to study.”

Despite his previous cycle touring experience, Dr Jenkins says he’s been grateful for the advice he’s received from other University of Otago staff who have made the journey before him particularly that of Professor James Higham from the Department of Tourism. Professor Higham will join the pair for one of the final legs of their journey, cycling alongside them when they ride from Lake Hawea to Queenstown.

Others at the University have offered support too, with Professor Richard Blaikie, Deputy Vice-Chancellor, Research and Enterprise, who has himself just completed a fund raising cycle trip from Dunedin to Nelson, offering Dr Jenkins his spare University of Otago cycling kit to wear.

Dr Jenkins has also been loaned bike touring equipment from his former PhD supervisor Associate Professor Elaine Hargreaves from the School of Physical Education, Sport and Exercise Sciences, and her husband Gareth.

And when he sets off, his bike will be fitted with an official mascot, a helmet-wearing rubber duck equipped with flashing light and a squeaker-horn which he was given by Client Services Administrator Kerrie Harford as part of the Department’s Secret Santa gift exchange.

Dr Jenkins and Mr Fearn will begin their cycle trip at Cape Reinga on 13 December and are expecting to arrive in Bluff around 15 January.

Follow Dr Jenkins’ journey on Facebook  or visit the Givealittle page to contribute to postage for a postcard.

Any funds left over will be donated to the Variety children’s charity Bikes for Kids programme which provides bikes to deserving or disadvantaged children in Aotearoa.