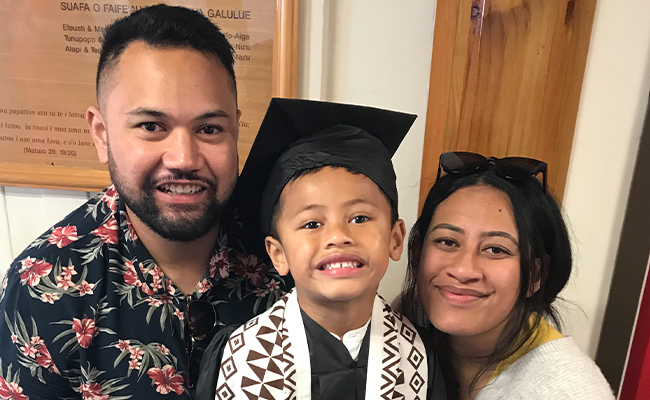 After starting University not knowing what he wanted to do, Adam Faatoese is leaving as a doctor.

He has a simple explanation for why he ended up choosing Medicine: “I wanted to do something that really helped my community and specifically, our Pasifika people.”

The ambition will be a significant step closer this Saturday when he receives his Bachelor of Medicine and Bachelor of Surgery degree.

Crossing the stage is the culmination of an eight-year journey for the first-generation NZ-born Pacific Islander, whose parents moved from Samoa to give their children greater opportunities.

“One of the benefits of having trained in Wellington is the more diverse population group. I’ve already had placements in the Porirua area where there’s that high prevalence Pacific community which has even furthered my motivation to work in those populations.”

It is a journey which has included juggling the intensity of medical study with raising a child and moving from Dunedin to Wellington for his clinical years.

“It’s been a bit of a roller-coaster,” Adam says. “Having a young family has been quite helpful because it’s really made me change perspective on life - being a young father, and because of that being able to appreciate the time outside of studies and work a little bit more.”

Born and raised in Dunedin, Adam enrolled at Otago to study a Bachelor of Science when he finished school.

“In the beginning, I had no idea what path I wanted to take after university, only knowing that I enjoyed and excelled in science throughout high school.”

As the degree progressed, he couldn’t see himself in a laboratory-based role and was inspired by friends and peers who were studying to be dentists and doctors.

“I realised I wanted to be in the community helping out people directly which fitted well with the profession of Medicine.”

After completing his BSc, majoring in Biochemistry, he entered postgraduate Medicine and made the transition with the help of a strong support network of family and friends, along with Otago’s Pacific Islands Centre, Pacific Islands Research & Student Support Unit (PIRSU) and the Otago Samoan students association.

He had a good mentor in his older sister Dr Allamanda Faatoese, a Research Fellow at the University of Otago, Christchurch, where she studies cardiovascular risk among indigenous and ethnic minority communities.

“Studying medicine has definitely taught me not only from an academic point-of-view, but also has helped in my own character building. It has made me more confident, outgoing and allowed me to have a better time management and relational skills,” he says.

Adam decided to spend his clinical years in Wellington, where he lives with partner Ivanah and son Leon (5), and is now a first-year house officer at Hutt Hospital.

The move north provided opportunities such as a summer studentship under Dr Dianne Sika-Paotonu looking at the usefulness of a certain tumour marker (circulating tumour DNA) for early cancer diagnosis in the Pacific.

Being Wellington-based also gave Adam greater exposure to the communities which inspired his decision to become a doctor.

“One of the benefits of having trained in Wellington is the more diverse population group. I’ve already had placements in the Porirua area where there’s that high prevalence Pacific community which has even furthered my motivation to work in those populations.”

He is leaning towards a future in General Practice: “After having a family GP, who looked after my entire family, my parents and my siblings, that’s been a great influence on me.”

Graduation day will be especially poignant because Adam will use the occasion to pay tribute to two cousins, Peko and Timo, who have passed away due to cancer over the last couple of years.