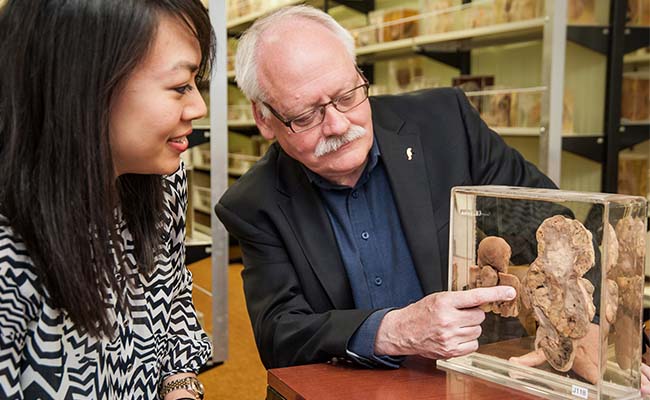 Professor Brett Delahunt ONZM KStJ FRSNZ, from the Department of Pathology and Molecular Medicine at the University of Otago, Wellington, has been presented with a unique Gold Medal from the New Zealand Society of Pathologists in recognition of his 41 years of service.

The Gold Medal was presented by the President of the New Zealand Society of Pathologists, Dr Peter Bethwaite, accompanied by senior members of the profession, at a special reception held at Bellamy’s at Parliament buildings last week.

Dr Bethwaite paid tribute to Professor Delahunt’s decades-long service to the Society, including his 10 years as President, and in particular the efforts he made some 20 years ago to resurrect the Society to the status it has now as the professional body for pathologists in New Zealand.

“I resigned from the hospital and in two weeks I was in the Pathology Department. I joined on 4 February, 1980. It was one of the best things I have ever done in my life.”

Dr Bethwaite told those at the event the Gold Medal award was a unique one, which would likely never be repeated.

The presentation coincides with another milestone for Professor Delahunt, who celebrates 25 years as a Professor in the Department of Pathology and Molecular Medicine at the University of Otago, Wellington this year, just one of many highlights in a long and distinguished career.

If not for a downturn in the Australian mining industry; however, he could have been classifying rocks, not diagnosing human diseases.

“I started off life as a geologist,” he explains. “But when there was a collapse in the mineral boom, I thought it wasn’t worth starting a PhD in geology, so I went into medicine.”

Professor Delahunt finished his Bachelor of Science with Honours in Geology at Victoria University of Wellington in 1972, and headed straight into studying Medicine at the University of Otago the following year.

“I was at the Wellington School of Medicine virtually from the start. I was a trainee intern in 1978, and undertook my first House Surgeon year at Wellington Hospital."

He had planned on being an ear, nose and throat surgeon but as a first-year house surgeon at Wellington Hospital he was offered the post of Lecturer in Pathology at the University.

“I resigned from the hospital and in two weeks I was in the Pathology Department. I joined on 4 February, 1980. It was one of the best things I have ever done in my life.” 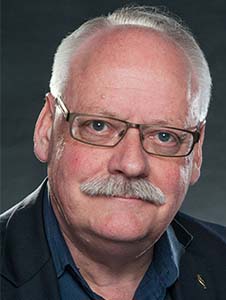 In 1985, he was one of the first two trainees in pathology to successfully take the Part II of the Royal College of Pathologists of Australasia Fellowship exam in Anatomical Pathology in Wellington. He was then admitted as a Fellow of the College and promoted to Senior Lecturer.

In 1987 he travelled to Carnegie-Mellon University, in Pittsburgh, United States, for postgraduate study and in 1989 he returned to the USA as a Visiting Scientist at the Armed Forces Institute of Pathology (AFIP) in Washington, D.C.

It was a formative time, during which he met pathologists he would form life-long collaborations with.

“The AFIP is gone now, but it is really famous. You would walk down the corridor and there were just legends in pathology all around you. It was amazing.”

“Pathology has changed a lot. It’s incredible. When I started off, we used basic haematoxylin and eosin stains to look at cells under a microscope. Now it’s completely revolutionised. Now we have antibodies that glue onto proteins and they are able to mark thousands of different genetic mutations which facilitate diagnosis.”

One was the late Dr Kash Mostofi, then Head of Urologic Pathology at AFIP, who developed the World Health Organization classification for urologic cancers, and in 1989 invited Professor Delahunt to be a member of the WHO Renal Tumour Panel.

Professor Delahunt also got to know Professor John Eble, Chair of the Department of Pathology and Laboratory Medicine at the Indiana University School of Medicine.

Together, Professor Delahunt and Dr Eble fully elucidated the nature of papillary renal cell carcinoma, a type of renal cell malignancy which makes up 14 per cent of kidney cancers.

At the time they met, Professor Eble was writing one of the first textbooks in urologic surgical pathology, and he asked Professor Delahunt to write the chapters on tumours of the kidney which have become classic texts.

After 40 years in the Pathology Department on the Wellington campus, Professor Delahunt now has more than 500 academic publications to his name.

One of his most significant achievements has been to develop a grading system for classifying kidney cancers, which is regarded as the gold standard and is used to diagnose 50,000 cases of kidney cancer a year in the United States alone. His work was published in leading pathology journal, The American Journal of Surgical Pathology in 2013 and is incorporated into the WHO classification. Although the article has now been cited almost 1,000 times it is cited less frequently now as the grading system it refers to is so well known.

Professor Delahunt is also recognised as an international leader in the field of prostate cancer for his work developing and validating a new grading system for diagnosis. He has been a strong advocate for prostate cancer testing and was appointed National Patron of the Prostate Cancer Foundation of New Zealand in 2015.

Over the years, he has formed close personal friendships with top international pathologists, not just with those in the US, but also with colleagues in Europe. Among them, Professor Lars Egevad from the Karolinska Institute in Stockholm, Sweden, who is a major collaborator and, prior to the COVID-19 pandemic, would host Professor Delahunt annually as a Visiting Professor.

Over the years, he’s seen some striking changes in the pathology field.

“Pathology has changed a lot. It’s incredible. When I started off, we used basic haematoxylin and eosin stains to look at cells under a microscope. Now it’s completely revolutionised. Now we have antibodies that glue onto proteins and they are able to mark thousands of different genetic mutations which facilitate diagnosis.

“Interestingly enough, there is one category of renal cancer that is molecularly defined, so you can’t actually define them just by looking at them under the microscope, you’ve got to study the genetics. And that’s where we’re going – that and the use of artificial intelligence in diagnosis.”

He remains at the forefront of his field and is currently working with scientists in the US and Europe investigating the use of artificial intelligence to diagnose prostate cancer biopsies.

Professor Delahunt’s achievements in pathology have been widely celebrated both nationally and internationally with numerous awards.

Most notably he was awarded the Koss Medal from the International Society of Urological Pathology in 2003, the Gold Medal and the designation of Distinguished Fellow from the Royal College of Pathologists of Australasia in 2009 and the Distinguished Pathologists Medal of the International Academy of Pathology in 2013 as recognition of his outstanding contribution to the discipline of pathology.

He was awarded the Hercus Medal by the Royal Society Te Apārangi in 2018 for his research on prostate and kidney cancer. The medal is awarded only once every two years for sustained excellence in molecular and cellular sciences, biomedical science, clinical science or public health research.

He was appointed Knight of the Order of St John (KStJ) in 1995, an Officer of the New Zealand Order of Merit (ONZM) in the 2004 Queen’s Birthday Honours for services to pathology and in 2015 he received the National Meritorious Service Award of the Cancer Society of New Zealand for outstanding contributions to the Society and to cancer research.

As a Wellingtonian, he was proud to be named Science and Technology winner in the 2019 Dominion Post’s Wellingtonian of the Year Awards, taking the opportunity to promote the importance of men’s health in his acceptance speech.