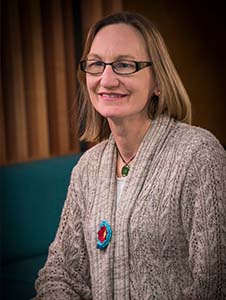 While most people might feel like they deserved a break after completing their PhD, Caroline Fyfe, who graduates in absentia in December with a PhD in Public Health from the University of Otago, Wellington, instead set off to do a 44 kilometre run with a friend up and over the capital city’s steep hills.

“The same week I defended my PhD thesis I had arranged to do a marathon around Wellington but the marathon was cancelled so we did a half marathon, and then the next weekend we did the whole distance on our own. I had actually been out to celebrate the PhD the night before – so it was a good day,” she laughs.

Caroline, who graduates in absentia on 11 December, spent about five years working on her thesis, the first three years part-time at Massey University before transferring to Otago to work full time on it for the final two years.

Her PhD thesis, From Hearth to Health, investigated the health effects on residents of having insulation installed in their homes through the government-funded EECA Warm Up New Zealand subsidy programme between 2009 and 2014.

“It was a very big data linking exercise using statistical analysis – it included more than 200,000 houses, so it was a very large study,” she explains.

Caroline was able to demonstrate that insulating houses did improve people’s health, finding the change in rates of hospital admissions amongst residents after their homes were insulated was 11 per cent lower than for a control group whose houses had not been insulated. The effect on hospital admissions was even greater when narrowed to conditions associated with cold temperatures, such as asthma and COPD, and even heart disease.

“It had always been difficult to find a significant link between health and improved housing because there are so many other things that go on, but by using that really enormous data set I was able to do that.

“It should make a really big difference because we now have something that we’ve proven statistically. We know having a warmer home does actually improve people’s health.”

“It had always been difficult to find a significant link between health and improved housing because there are so many other things that go on, but by using that really enormous data set I was able to do that.”

With her project being so heavily reliant on analysing large amounts of data, it was a struggle to keep working on the research during last year’s COVID-19 lockdown, with husband Fraser, son James (18) and daughter Niamh (15) all gathered in one room at home.

“I was using these enormous data sets and had to find somewhere with good Wi-Fi coverage - where I could fit my computer. Not having the Wi-Fi power to actually do the work got pretty frustrating. It was quite stressful having four people in one room all trying to work together. I think that would have been a big challenge for everyone. I was incredibly relieved when we were able to get back into the building again.”

Along with other Wellington staff and students, she was also faced with a sudden return to working from home in August when the academic building was closed for seismic reasons.

Having done it once before, though, the return to working remotely proved less of a struggle this time.

“When we got locked out of the building again, things worked much better, I think because everybody had been through it before.”

Caroline moved to New Zealand from the UK 18 years ago. As an undergraduate, she studied Environmental Science and Economics at Manchester Metropolitan University and later worked as a geography teacher. When she moved to New Zealand she initially took up a role as research and education coordinator for a home insulation provider in Christchurch.

“Some time later I started working at Massey University looking at environmental health indicators and one of the ones I looked at was the influence of the condition of housing on people’s health. That piqued my interest, and six months in, I thought this is a PhD, and if I’m going to do this work, I’d like to get a PhD out of it.”

Caroline’s supervisors at Otago were Senior Research Fellow in the Department of Public Health, Dr Lucy Telfar-Barnard, and the Director of the He Kāinga Oranga/Housing and Health Research Programme, Distinguished Professor Philippa Howden-Chapman CNZM QSO FRSNZ. Her Massey supervisor, Professor Jeroen Douwes, the Director of the Research Centre for Hauora & Health, also stayed on as a supervisor when she transferred to Otago.

She rates transferring her PhD to Otago and having Dr Telfar-Barnard and Professor Howden-Chapman as supervisors as the highlights of her PhD journey.

“You couldn’t really ask for better people. I was absolutely delighted that they agreed to be my supervisors, and being able to work with Professor Douwes, who is an expert in asthma and respiratory disease, was such a bonus.

“I’ve just really enjoyed working with the whole housing and health research group at Otago. It’s been an absolute joy. They are so well informed and so rigorous in their research and the researchers are just incredibly friendly.”

Caroline was one of those acknowledged when the Royal Society Te Apārangi awarded its top research prize, the Rutherford Medal, to the He Kāinga Oranga group this year.

“It was well deserved by the whole housing research group. I don’t think I’ve ever been anywhere that has managed to transfer research into policy at quite the speed they have managed to.”

Being part of such a team capped off a high achieving few years for Caroline, who was delighted to have had her research published in the prestigious British medical journal, The BMJ, last year.

She now has a role working at Motu Research doing an evaluation of the successor to Warm Up New Zealand, the EECA Warmer Kiwi Homes programme, in partnership with Otago, Massey and Victoria Universities.

Caroline also works one day a week with the He Kāinga Oranga group at Otago, where she is researching the impact of Airbnb on the long-term rental market in New Zealand.

Her research Association between home insulation and hospital admission rates is published in The BMJ.