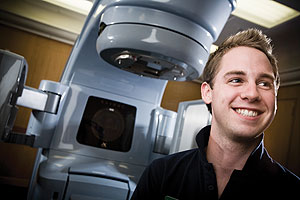 "It's satisfying work," he says. "I can branch out and up. I have job security, but I can travel, too."

One of the best features of the three-year radiation therapy course, says Logan, is the "great mix of theory and practice".

"Half the time is spent in class, the other half in the clinical environment," he explains. This meant the skills he learned in study transferred straight into his work. Logan adds that during this time, he really appreciated "the great support in the hospital and from the academic staff at the Wellington campus".

Now, says Logan, "I can work pretty much anywhere in the world - the qualification is very highly regarded."

But although he can travel wherever he wants, after three years at Dunedin, Logan says he still "likes the mix of people and technology, and the fact there's always something different to do". This includes working closely with the radiation oncologist (the specialist doctor) to mark up, plan and deliver appropriate treatment.

"It can be challenging, dealing with families, and their emotions," he acknowledges. "But it comes with the great satisfaction of knowing I am helping my patients in some way."