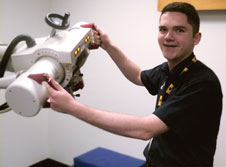 “I’ve always had a passion to work in healthcare, and an interest in technology, so naturally my attention was drawn”, he says.

After researching more about Otago’s Radiation Therapy, James realised it was the right choice for him. The following year he moved to Wellington to study RT.

“I’ve had plenty of opportunities to gain hands-on experience with patients in a supportive environment, which ultimately enabled me to go through the transition of putting the academic concepts learnt in the classroom, into practice”, he says.

He’s now planning to travel to Italy to attend the European Society for Radiotherapy and Oncology International Conference (ESTRO), and is considering future postgraduate study—to develop both clinically and academically.

Reflecting on how his life’s changed since attending that seminar in Dunedin, James also points out his newfound attention to detail. “Due to the nature of radiation, we work to millimetre accuracy in all that we do, so it’s pivotal to have an eye for detail. Now in my out-of-work life I am conscious of things being spot-on accurate—which has all developed since training and working!”