Human brain on show in planetarium 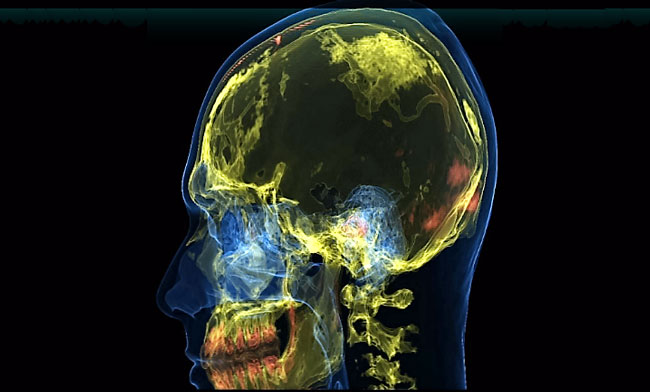 An image of the human head from the Neurodome short  film showing this week at the Otago Museum.

Ever wanted to see inside a real human brain as fluorescent neurons fire out messages to control everything from your emotions to your muscles?

In a New Zealand first, 3D tours of the human brain, created with cutting-edge neuroscience technology, will be on show in the Otago Museum’s Perpetual Guardian Planetarium this week, which is Brain Week.

The Neurodome short film reveals images of the brain which usually only scientists get to see – real-time shots of everything from the internal bone structure to the neurons, which also receive information from organs like the eyes, ears and skin.

In the film, scientists have lit up some of the billions of neurons in the brain through a combination of techniques, which included injecting a virus to turn them fluorescent.

A laser scanning microscope took images deep inside the brain as well, to help show how various genes are expressed in different kinds of neurons, because each type of neuron may play a unique role in processing information.

Neurodome founder and director, Dr Jonathan Fisher, says the film was created specifically for showing in a planetarium, by an elite league of scientists, animators, film specialists and educators.

Dr Fisher is Assistant Professor in the New York Medical College's department of physiology and has a passion for showing the public images revealed by technologies which he believes are the spaceships of the inner frontier, so he let the University of Otago’s Brain Health Research Centre show the 10-minute film for free if it would make entry to the screenings free.

The Neurodome is screening at the Otago Museum’s Perpetual Guardian Planetarium 4.30pm and 4.45pm on Friday and Saturday. While entry is free, bookings are essential. They can be made by phoning the museum or through its website: http://bookings.otagomuseum.nz/book-event/867