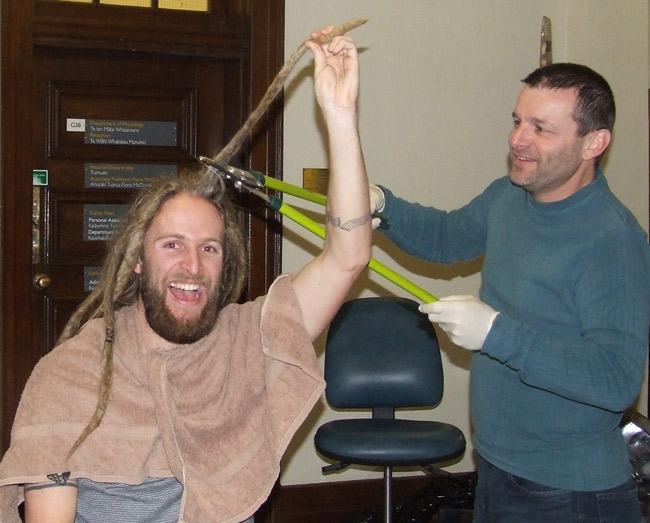 “So cold!” is the answer Anatomy PhD candidate Josh Houlton gives when asked how he feels after shaving his dreadlocks in the foyer of the Lindo Ferguson Building in support of Leukaemia & Blood Cancer New Zealand. 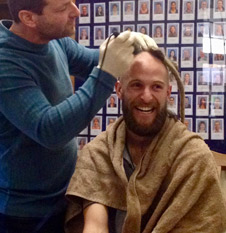 Going … Progress is made.

He says after two-and-a-half “long” years with 24 dreadlocks he now realises how much insulation they provided.

The Clarkson Lab student says he initially planned to shave his head the moment he raised $30 per dread (making a target of $750).

“After a mere 48 hours I had already overshot this target and figured I may as well increase my target as it was for such a good cause,” he says.

“It was then that several staff members throughout the Anatomy Department approached me and expressed their interest in assisting me. Since then, the Department has been absolutely amazing and has gone above and beyond to help me fundraise. They put posters up everywhere throughout the Department which has dramatically increased publicity, helping me get donations from the technicians and vets to the undergraduate and postgraduate students.” 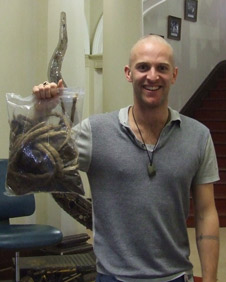 Gone … A much chillier Josh Houlton with a souvenir bag of dreadlocks.

As well as supporting a very worthy charity, Josh says losing his dreads is allowing him to re-experience many sensations – “like rain dropping on my head and having a proper shower”.

“As fun as they were to have (and wind the parents up with), the dreads had definitely done their dash. I had to cut back the little things these past few years, like going for a surf or even a morning shower, because the moment they got wet they would start dripping for a good few hours.”

He says he’s been pleasantly surprised about how his bare head looks – and would like to encourage others to get involved with Shave for a Cure.

“It's such an amazing experience and you can do a world of good for those affected by blood cancers in New Zealand.”