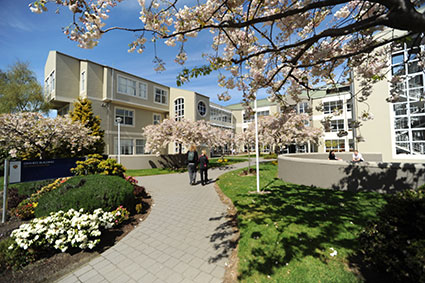 In the beginning, computer science at Otago University was taught from the Computing Services Centre. A separate department was proposed in 1983 and the new Computer Science Department began offering papers in 1984.

See a short history of the department

It currently has fifteen lecturing staff, two honorary lecturers, three Professional Practice Fellows, and seven support staff. The Department until recently was housed in several buildings including the historic Archway West building where the administrative centre resided. The entire Department is now located in the Owheo building, 133 Union Street East.

Our focus has always been great teaching informed by great research. We make a point of providing a supportive environment for learning. Our curriculum closely follows the ACM/IEEE computer science curriculum, and as such our graduates are equal to computer science graduates from the best universities in the world.

In 2008, our Systems Research group became part of a SUN Centre of Excellence - Otago was the first university outside the US to gain such an honour. Our Computer Graphics group has been consistently world class for over two decades resulting in many influential publications and a successful local company (Animation Research Limited). The AI group is developing understanding of how the brain works through it's neural networks, cognitive science and logic research. In an age where all information is online, our Information Retrieval group is busy building better search engines. The Theory group is discovering knowledge about some of the fundamental data structures in computer science, and the Computer Vision group is working on interpreting x-rays for medicine and industry.

We are also a community minded department. We regularly contribute to: the scientific community as editors and reviewers; the local community by giving advice to schools; the business community as consultants and giving advice; and the university community on boards and committees.

Our graduates have a bright future. With a chronic shortage of ICT staff and programmers in New Zealand, the number of jobs and salary levels within the industry have been rising. Computer Scientists are among the highest paid graduates of all disciplines, and work in some of the most interesting environments, both technical and business- oriented. You can also check the MBIE's Job Prospects for Software Developers.

We hope to see you in our classes in the future.