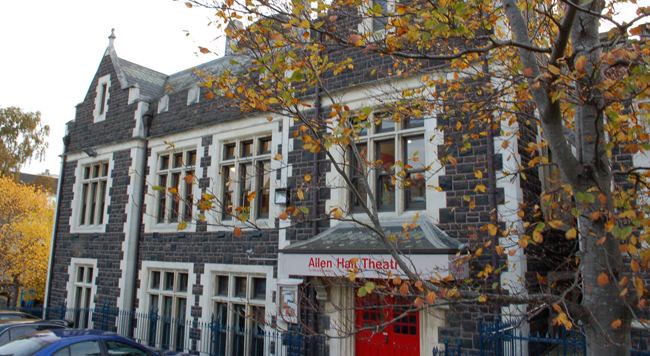 The 100th anniversary of Otago's renowned theatre, Allen Hall, will be marked with a reunion this weekend.

A sizeable group of New Zealand’s theatrical talent – directors, actors and comedians – as well as those who have forged their careers along different paths, will descend on Dunedin this weekend for the University’s celebrations of 100 years of Allen Hall.

The building, which originally housed the University’s Student Union, has had a rich and varied history since it opened in 1914. This history will be celebrated over the weekend with an equally rich and varied programme of events.

“Pop up” plays, a red carpet Party of Light, an open mic extravaganza and the launch of a book celebrating its history are just some of the exciting events on this weekend.

Head of Theatre Studies Hilary Halba says there are many people with really “heartfelt” memories of Allen Hall who will return this weekend to celebrate the building which housed their beginnings.

“There are so many people who have taken the skills they learned here and run with them,” Ms Halba says.

“But before theatre was taught here as an academic programme the building was a cultural centre for the University – and the reunion will also celebrate that.”

Allen Hall and the Clocktower presinct.

It was designed by Edmund Anscombe to fit with the original University buildings and other additions, including the adjacent School of Mines, and was named Allen Hall for former Chancellor James Allen who headed a committee to raise funds for the building.

Although not built as a theatre, Allen Hall featured a small proscenium arch stage, which meant it could be used for graduation ceremonies, debates, concerts and dances. It was even home to one of New Zealand’s first radio broadcasts - transmitted by Physics Professor Robert Jack in 1922.

When Allen Hall was opened the University had just over 600 students, but as these numbers grew it became increasingly crowded. In 1960 the current University Union building was opened, and Allen Hall began its new life as a theatre – used primarily by the Otago University Drama Society (OUDS).

In around 1971, under the guidance of Drama lecturer David Carnegie, various features were added to the Hall, including overhead catwalks to provide lighting rigs. As a theatre, it was used by the OUDS, Drama students, Music students and also the French, German and Classics Departments.

Around that time, Allen Hall became the “home” of Drama – now Theatre Studies. 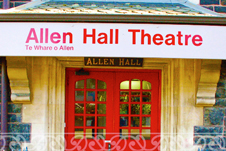 Associate Professor Lisa Warrington, who has researched and edited the history of the Hall, says she is delighted to see the building have its centenary celebration.

“Much of my own professional working life is tied up in Allen Hall, and I have seen so many students pass through its doors, some of whom have become lifelong friends. Having the chance to see a number of them gathering here for the reunion/centenary celebration weekend is a pleasure and privilege.” 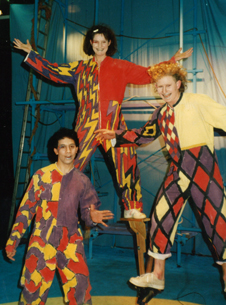 Working together, some of those present will be responsible for actually creating items in the reunion programme, including “pop up” plays.

Ms Halba says she asked several playwrights with links to Allen Hall to create short plays, of the kind they would write on the plane on the way down to the reunion. Their brief was to make them just four to five minutes long, feature between one and four actors, and be on the topic of “reunions”.

While the plays have already been written and the actors and directors chosen, they will have just half an hour to actually rehearse them before the live performance.

Other events taking place include an open mic session, which will feature everything from musical numbers to stand-up routines.

The red carpet Party of Light event will include a red carpet entry, cocktails and finger food, a photo booth, speeches from the Vice-Chancellor and other dignitaries and guests, and an illuminated procession to Refuel for a very rare, one-off performance by the original Verlaines.

“It will be a reunion like no other,” laughs Ms Halba. “Every department has its history but because of the nature of the department that has been housed here I think we will have a particularly original and enjoyable reunion.” 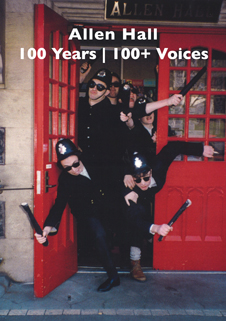 Lisa Warrington has researched and edited a colourful history of Allen Hall.

A lively and colourful book has been researched, written and compiled by Theatre Studies’ Associate Professor Lisa Warrington, with Alison Finigan of Alumni Relations.

It will be launched on Friday 12 September at the opening of the weekend event.

It contains 100 years of Allen Hall's history, with anecdotes and plenty of photos, and is made personal by the inclusion of memories by current and former staff and students – they are the "100+" voices referred to in the title.

Alumni Quotes from the book:

“I just remember feeling really appreciative that we had this amazing playground – what an incredible resource to have a whole theatre at our disposal. Climbing up ladders and hanging lights, acting, writing, directing, under the guidance of people who were not only incredibly knowledgeable, but passionate about theatre and so generous with their time and experience.”

“Overall I think the thing that Allen Hall instilled in those who wanted it was the passion to create. The staff had such trust in the students to make their own theatre.”

“It's hard to single out just one fantastic thing from Allen Hall. My experiences as a student there were so wonderful! I learnt so much, made amazing friends and performed in many productions. Lunchtime Theatre is possibly the best invention ever!”