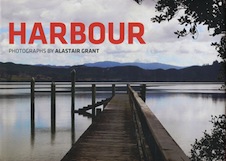 For three years Alastair Grant travelled the great inland harbours of the west coast of the North Island creating a photographic record of these fascinating and under-appreciated regions, trying to capture their atmosphere and a feel for the people who live and work around them.

The harbours are drowned river valleys. They differ greatly in size, but share a similar climate with prevailing westerly winds. They are all tidal. They were settled by Māori following the great migration in the 13th and 14th centuries and have played significant roles in Māori history. To this day, marae dot their shores.

The large number of shipwrecks around the entrances and within the harbours bears witness to their importance as centres of commerce and trade in earlier times, particularly following the arrival of Europeans in the early to mid-19th century.

The Manukau and Porirua harbours support large urban populations and commercial activities on their shores, while the others are less populated and more remote, popular for holidays and little known by outsiders.

Born in Oamaru and an alumnus of Otago University, ALASTAIR GRANT was given a Kodak camera by his father at the age of 12 and has enjoyed photography ever since. He has exhibited in the Barry Lett Gallery, the New Vision Gallery and the City Library in Auckland, has had several exhibitions at the Govett-Brewster Gallery in New Plymouth, and has exhibited with Janne Land in Wellington.