The Face of Nature: An environmental history of the Otago Peninsula 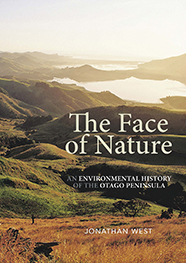 Bounded by the wild waves of the Pacific on the east, and the more sheltered harbour on the west, the Otago Peninsula is a remarkable landscape. Today a habitat for a diverse array of wildlife including albatrosses, penguins and seals, the Peninsula has undergone dramatic changes since it first attracted human settlement.

An important new book by Jonathan West, The Face of Nature: An environmental history of the Otago Peninsula, explores what people and place made of one another from the arrival of the first Polynesians until the end of the nineteenth century.

The Peninsula has always been an important place for Māori, who have retained land that remains at the core of their history in the region. However, most of the landscape was transformed by 19th-century British settlers from native forest into small farms that fed a booming Dunedin, at the time New Zealand’s leading commercial city.

‘The rapid environmental change led to many negative impacts as well,’ says West, ‘including loss of habitat for birds, dramatic erosion and eruptions of pests and weeds.’

Natural scientist and historian George Malcolm Thomson reflected in 1901 that in just fifty years, ‘the whole face of nature is altered.’

West’s beautiful book incorporates a rich array of maps, paintings and photographs to illustrate the making – and unmaking – of this unique landscape. In doing so it illustrates why the Otago Peninsula is an ideal location through which to understand the larger environmental history of these islands.

Jonathan West was born and raised in and around Dunedin. He worked as an historian at the Waitangi Tribunal for several years and more recently joined the Office of Treaty Settlements. Jonathan’s publications include contributions to Wild Heart: The possibility of wilderness in Aotearoa New Zealand (Otago), The Lives of Colonial Objects (Otago, 2015) and New Zealand and the Sea (BWB, forthcoming). He lives with his wife Kate and their children in Lower Hutt.

'This book is essential for anyone with a love of, and interest in the Otago Peninsula' – Booksellers New Zealand blog, 14 February 2018

'In West's cultural and ecological study, the peninsula echoes the experience of areas throughout New Zealand, reflecting his ability to weave individual threads of human history into a panoramic whole ...' – New Zealand Listener, 3 March 2018