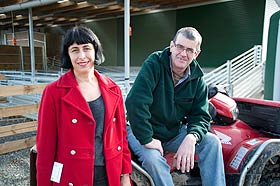 Dr Kirsten Lovelock
"Health and safety on farms is not a marginal issue or concern. It is central to maintaining an economically viable unit, central to our economy and central to sustaining our economy."

The University of Otago's Injury Prevention Research Unit (IPRU) has completed the most comprehensive study of occupational health in agriculture in New Zealand – with worrying results. Although industrial injury statistics are falling in many occupations, those in farming are not, putting agriculture on a par with the high-risk mining, forestry and marine industries. Farming involves about nine per cent of the New Zealand workforce, second only to tourism, so it's a major public health problem.

They discovered that ACC sees only the tip of the injury iceberg. Only one in three who had been injured or unable to work had claimed, which suggests that economic losses are much greater than currently estimated. Common injuries ranged from sprains, strains and cuts, to breaks and amputations. Most happened outdoors on flat terrain in good conditions, and typically involved animals, vehicles or machinery.

The survey found many farmers ignored safety rules, even around machinery known to be dangerous and, while there had been significant improvements in farm safety features, not every farmer had the latest gear – and not all who had it used it. However, says Lovelock, despite low levels of safety compliance, "most of the farmers we spoke to were genuinely concerned about the disease risk and injury rate".

"They were not naïve or complacent, for example, about issues around working with chemicals or the dangers that both tractors and ATVs present."

The survey found many farmers ignored safety rules, even around machinery known to be dangerous and, while there had been significant improvements in farm safety features, not every farmer had the latest gear – and not all who had it used it.

However, there was complacency over hearing loss, which is one of New Zealand's most significant compensation costs, especially with an ageing farm population.

"Farmers are exposed to noise from vehicles, firearms and hand-held machinery, and yet there is a reluctance to wear earplugs," says Lovelock. "Some older men have worked for 20 or 30 years without hearing protection."

The "she'll-be-right" attitude persists, with men, in particular, retaining an ingrained stoicism. There was general resistance to health and safety regulation – although one female farmer said regulation could help her to force her workers to wear safety gear.

Men and women are exposed to the same dangers, but international research says that women have a greater perception of risk and are generally more cautious than men.

Older farmers seemed to understand the need to take care of older bodies. They were generally receptive to safety ideas and had begun to adopt protective gear. At the other end of the age scale, children under five were being carried on farm vehicles, and five- to nine-year-olds were operating ATVs and motorbikes, working with animals, playing around machinery and using firearms.

"Boys are exposed to more risk than girls and at an earlier age," says Lovelock. "And, when they turn into young men, they take more risks. Some say that until their hormones settle down there will be attrition.

"But it is important to note that middle-aged and older men are most at risk of non-fatal and fatal injury." Dangers included working alone, long tiring days, and limited finance and time. 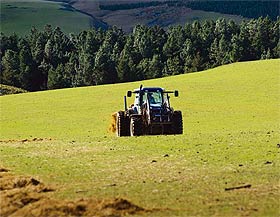 Not having enough time to do tasks, leaving tasks unfinished and being unable to keep farms tidy all significantly increased risk for those working on properties. Unsuitable equipment attracted criticism. Some imported machinery designed for the wide-open flat plains of North America is simply unsuited to much New Zealand terrain.

Another danger is the kiwi "number-8-wire" mentality, which sees farmers tinkering with machinery, changing fittings to improve performance and sometimes compromising safety. Changing the habits of a lifetime is hard, says Lovelock, so education is only part of a long list of recommendations made by the researchers.

"In order to help reduce hazards, we need multifaceted interventions that address education, the design of equipment and workspaces, workplace organisation, economic considerations, affordability in a diverse sector, policy and the regulatory environment.

"Sometimes the changes necessary on a property will only be minor and will not necessarily involve great expenditure."

Lovelock says what happens on the farm has wide repercussions.

"Health and safety on farms is not a marginal issue or concern. It is central to maintaining an economically viable unit, central to our economy and central to sustaining our economy.

"For this reason addressing health and safety on farms must be central to strategic planning for agriculture as an industry."