Five generations of the Glenny family at Otago

In response to our call for memories as part of Otago’s 150th anniversary celebrations, Malcolm Glenny got in touch to tell us about his research into his family’s links with the University.

He had decided at the beginning of the year to write something about the six graduates spread over five generations of his family who have attended Otago, beginning in 1876 – only seven years after Otago was founded.

Originally intended for a family audience, his research grew into a much larger project, which he has since published on his blog.

Here is a shortened version of Malcom’s story, in his own words, about the Steven and Glenny family ties to Otago: 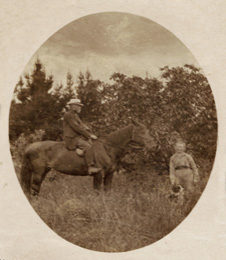 George and Jessie Steven on their farm at Rosewill about 1907

In 1876 George Steven arrived in Dunedin from Port Molyneux to enrol, probably in the new post office building which housed the University. George, my great-grandfather, was 23 years old. He had been born in Ayrshire in Scotland and emigrated to New Zealand at the age of 11 with his family. Like many Scottish Presbyterians, they placed great value on education.

He is described as an avid reader with a wide range of interests. His youngest son wrote of him a century later that “he was a scholarly type, but had also been a fair sport in his youth, having done well at long distance swimming and running”.

After his two years at Otago George became a teacher. He taught initially in Balclutha and Kaitangata and then moved to South Canterbury where he served as headmaster at Orari Bridge, Hilton, Glenavy and Winchester.

In 1884 George married Jessie Thomson, a milliner from Timaru. They produced a family of five children. Sadly the eldest, Lily, died of illness at age 12; the second, Nellie, was drowned at age 15 in an undertow at Riverton beach; and Jim died of wounds suffered in the battle of Passchendaele in 1917.

After George’s retirement in 1904 the couple acquired land near Timaru, where they established an orchard and grew wheat. An enduring image of him is riding around the farm on horseback, reading a book. 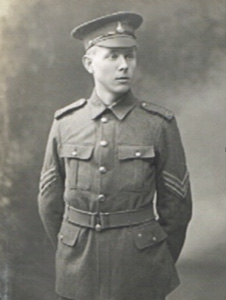 George and Jessie’s fourth child was John Steven, called Jack all his life. A very able scholar and capable sportsman, he won a junior scholarship to Timaru Boys’ High School, where he was the dux in 1912 and played rugby and cricket in the first teams. A senior scholarship enabled him to undertake study in the humanities and law at Otago in 1914. He was the first of three generations of the family to live in Knox College.

Jack’s tertiary studies were interrupted by the First World War. In 1915 he enlisted in the Canterbury Regiment and fought on the Western front. He was wounded at Passchendaele on 12 October 1917.

After recovering from his wounds Jack arrived back in New Zealand in 1918 and returned to his studies in Dunedin. He graduated with a law degree in 1921 and worked in a law firm in Timaru, before establishing his own practice there in 1935. In 1925 he married Bessie Waddell. Their only child, Anne, was born in 1928.

Anne described her father as a kind, gentle man who gave his time willingly to other people. At his funeral service in 1958 the officiating minister said of him in his eulogy:

“Seldom have I met a man better informed on a wider range of subjects. In the early stages of his illness when I visited him, he would talk on Spanish or American history, another day on rugby, or give an outline of the book that ought to be written on New Zealand soldiers. He had read widely and appeared to remember all that he had read. Frequently I was amazed at the breadth of his interests and at the depth of his insight. He was interested in the church, in his work, in history, music, literature, foreign affairs, and to all brought a wise discrimination.” 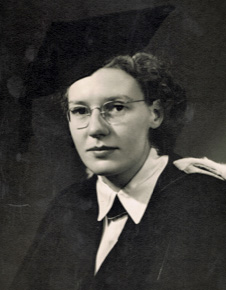 Anne on her graduation day in 1949

Anne, my mother, was born in Timaru. She attended Timaru Girls’ High School during the Second World War where she was a capable student and a fine musician. In 1946 she enrolled at Otago and lived in St Margaret’s College.

Her arts degree was made up of English, Latin and French, she read widely and later qualified as a librarian. She also spoke and wrote with care and precision and expected the same from her children.

Anne had been the school pianist in Timaru and she broadened her musical interests at university, learning to play the organ and taking up choral singing.

Having had a Presbyterian upbringing, she took an active part in the Student Christian Movement (SCM). This acronym was often jokingly called at the time “students contemplating marriage”. Here she met Don Glenny, their friendship leading to marriage in 1950. 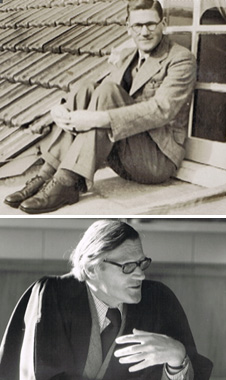 Don was born into a working-class family in Patea in South Taranaki. He was always grateful for the education he received from his primary teachers at the local school, especially for being taught to read, as he too became a voluminous reader all his life. He spent just one year at secondary school before starting work at the age of 15.

Don decided at the age of 18 to train for the Presbyterian ministry. His lack of educational qualifications forced him to wait until he had turned 21 to enrol at Otago, where he lived in Knox College. He began an arts degree in English, History, Greek and Philosophy. Because of his limited secondary education, he initially found tertiary study difficult, but came to love university study which he always regarded as a privilege.

After his marriage to Anne, Don started his theological training. He served at parishes in Te Aroha, Christchurch, Auckland and Hamilton over the next 35 years. Don and Anne had three children – I was born in Dunedin, David in Te Aroha and Alison in Christchurch.

In 1977 Don was appointed the Professor of Pastoral Theology at the Knox Theological Hall, which had been incorporated into the University. Anne finished her library training and worked in the Hocken library during some of their seven years in Dunedin. 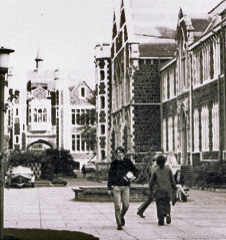 Malcolm in the courtyard in 1973

I spent most of my school years in Christchurch. At the end of my secondary schooling I decided to leave for Otago, where I too lived in Knox College.

I enrolled in the arts faculty, following a strong interest in French and German. I had the good fortune to be admitted to an honours course, where I experienced three years of small group tuition, delivered by an academic staff committed to teaching and to their students.

It was not all work. I also got great enjoyment from daily life both on the campus and in the college. I took part in Cameron Shield sports between Knox and Selwyn colleges – cricket, billiards, badminton – played with the University cricket club and also took part in drama productions.

I have spent my working life in education, initially as a teacher, then in school management, and latterly in the Ministry of Education. From Dunedin I joined the northern drift, living in Christchurch, the Hutt Valley and Auckland, as well as overseas.

My first university experience encouraged me to continue formal study while working, initially in linguistics and then in educational administration. In 1985 I married Alison Yarnton and we have three children, of whom our daughter is the middle child. 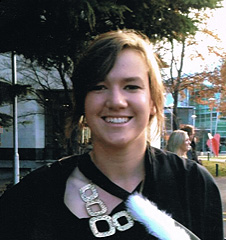 Helen at graduation in 2011

Helen was born in 1989 and brought up in Auckland. At the end of her secondary education, she decided that, she too, wanted the Otago experience. The Otago course structure – she completed a double degree in health sciences and physical education – attracted her to the university. So too did the campus life. She spent her first year in Arana College and then lived in a various flats with friends made at the college.

She describes her personal experience in this way:

“I went to Otago unsure about choosing a degree that could determine a life-long career. I need not have worried. I changed my mind four times in the first semester, discovering that I had far greater flexibility than the four generations that preceded me. Many options could have led me into my chosen career. In hindsight, the academic freedom I experienced there left a lasting impact.

I learnt how to research. In my third and fourth years I chose independent study papers with professors whose research I was interested in. Those papers gave me an opportunity to pursue a topic and follow the scientific process. As undergraduate students my classmates and I were treated like contributing members of a research team. I now work as a science journalist because of a fascination with research that grew out of those experiences.

And then there were the people – fellow students from all over the country, helping one another to sign up with an electricity provider, make mince on toast and stretch our course-related costs to a few luxury items – a season pass at Treble Cone, a watertight pair of shoes, a kebab on the way home from lectures. Those years were a springboard into something resembling adult life as part of a stimulating community of like-minded people, emerging confident and ambitious.”