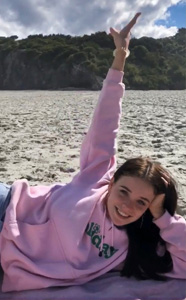 The generous response to the Sophia Michelle McMillan Crestani Scholarship fund has meant that the first scholarship in Sophia’s name was able to be awarded in March this year and fundraising for a second scholarship is well advanced.

Sophia passed away in tragic circumstances at a student party in North Dunedin on 6 October 2019, and the scholarship has been established by her family in her memory. The scholarship fund has touched the hearts of many, and at the beginning of this year $106,638 had been raised. The more funds that are raised, the greater the value of each scholarship.

“The support that we have received from Sophia’s family and friends, Otago students, staff and current parents has been amazing,” says Director of Development and Alumni Relations Shelagh Murray. “We are continuing to fundraise for the second scholarship, to be established as an endowment similar to the first. We’re heartened by the donations we continue to receive.”

The first scholarship, worth $4,500, is for a female second-year student studying Mathematics and/or Statistics. Sophia demonstrated her innate ability in mathematics at an early age, winning the St Benedict’s School Mathematics Cup and an academic scholarship to Queen Margaret College.

Sophia was also a sporty and creative young woman, a people person who gave back to her community as a gymnastics coach and recreation coordinator.

The second scholarship will be awarded to a female second-year student studying any subject.

Both scholarships are for second-year community-minded females, in financial need. Sophia’s parents, Elspeth McMillan and Bede Crestani said “some students are looking after family members with no income, and others do not have any family support and would not be able to attend university without this financial help. We hope and intend that they make a real difference over a long time, and allow students to gain an education when they may otherwise have had to withdraw.”

In addition to the scholarships, last July Sophia’s parents, and her twin sister Frances, along with the University, the Police and other Dunedin stakeholders, launched The Sophia Charter for Community Responsibility and Well-being to enhance safety and well-being of the student community in North Dunedin.

Information about the scholarship and making a donation

Creative disrupters keeping it real
Otago alumni are the creative force behind the government’s online safety campaign, deftly using humour as a courier for a serious message.