Alumni and guests were treated to a pre-game insight at the Coaches’ Breakfast held on the 26 February at the Otago Business School. The breakfast was held on the morning of the Highlanders vs Crusaders game; the first game of the 2021 Super Rugby Aotearoa season. 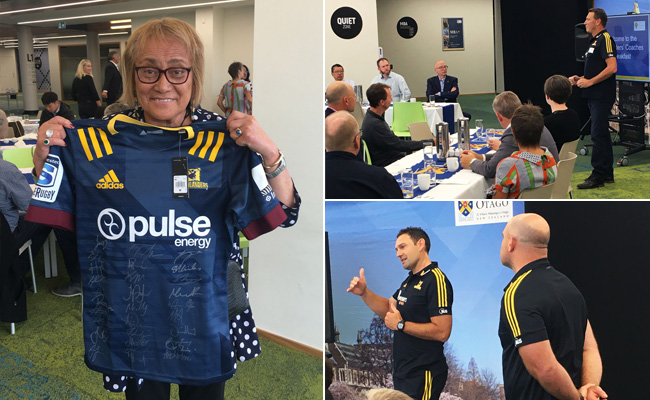 CEO, Roger Clark welcomed guests and explained the many different aspects of the relationship between the Highlanders and the University and encouraged anyone going to the game to ensure they were in their seats at the beginning of the game. The reason for this was apparent at the game when the Highlanders performed their haka, Hautoa Kia Toa.

Clarke Dermody, Forwards Coach, gave some insight into the pre-season training that the team had completed including a video showing the team out on the water. A clip of pre-season activities can be viewed here. While not giving any secrets away he also spoke about what to expect in the upcoming game against the Crusaders.

Head Physiotherapist, Adam Letts and Team Doctor, Dr Asheer Singh also added their thoughts on the team’ preparation and the Aotearoa season and its implications on players.

The morning concluded with a prize draw for signed Highlanders apparel.