(with a special addition from The Verlaines' Graeme Downes MNZM)

Thank you for the fantastic response to our Alumni Dunedin sounds music poll! We had answers from alumni spanning decades of music, with many from the Dunedin Sound era of the 1980s. Responses were often accompanied by comments saying how hard it was to choose – with a few alumni just giving up and supplying multiple options. When you read through the answers you see why - Otago students have been spoilt for choice, with so many bands either calling Dunedin home or playing gigs in the city.

While choosing winners from the survey may have come down to the wire, one thing is very clear - along with their degree, Otago students have left Dunedin with a unique soundtrack to their youth.

Here’s what you told us:

What was the best gig you attended while you were a student at Otago?

From 93 responses, and in a very close race, Otago alumni stayed loyally local by giving The Verlaines top honours, with The Chills hot on their heels, followed by Billy Bragg.

One answer summed it up: “Verlaines at the Empire, about 1984, Graeme Downes with his cigarette stuck in a hole in the guitar's head. Friday and Saturday night. Legends.”
You can listen to a live recording* of The Verlaines playing Bird Dog and Joed Out at the Oriental, Dunedin, on 20 April 1991 here:

The Verlaines were formed in 1980 by vocalist, guitarist and composer Dr Graeme Downes MNZM, who later became a lecturer at Otago’s School of Performing Arts. Their latest album, Dunedin Spleen, was released in 2019. 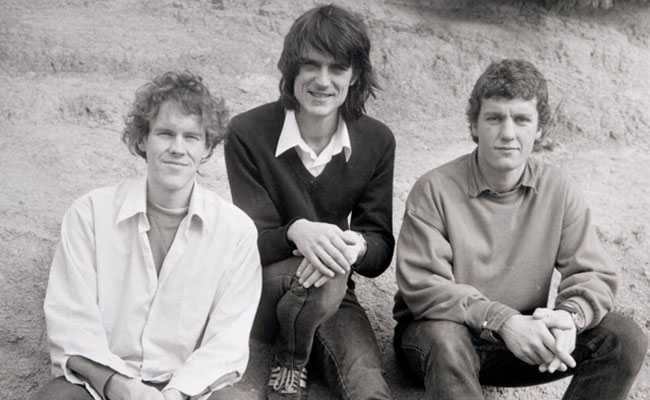 We asked Graeme if he had something he’d like to say in response, and this is what he sent us – Saturday night at the Oriental, featured below. He says it’s not about The Verlaines or Straitjacket Fits or Double Happys, “but all of us/any of us could have been the band in question”. He’s been drafting it for a while and thought alumni might get some pleasure and a “jolt of nostalgia” out of it.

Honourable mentions in the poll went to Split Enz, Netherworld Dancing Toys, Hunters and Collectors, Refuel, the Dunedin Town Hall, the Cook tavern and Union Hall. Orientation week got a big shout out, as did “University hops in the 1970s in the woolstores”; “1967 Fresher Hop. Pivotal evening in my life.”

As one person says: “Very hard q - the Pogues at Sammys, Painters and Dockers at Union(?), Spaghettis at the Cook (good boogie), Tall Dwarfs at the Ori, ?? I'll go for The Bats at The Provincial...or..”

Or how can you beat this: “The Chills playing at my flatwarming in the Scarfies flat, or HDU at the student union hall, or one of the cave raves at Tunnel Beach... too many to choose from.”

What was your favourite song as a student or the song that you associate the most from your time at the University of Otago?

Netherworld Dancing Toys’ For Today came out on top in this one, with second place going to The Chills’ Pink Frost and Straitjacket Fits close behind with She Speeds. The Verlaines’ Death and the Maiden and other Chills’ songs Heavenly Pop Hit and I Love My Leather Jacket were also favourites.

Songs mentioned in the 92 responses (some perhaps revealing a student mindset at the time) covered everything from SIX60’s Don’t Forget Your Roots to Mother Goose’s Baked Beans, B-52’s Love Shack, Black Eyed Peas’ I Gotta Feeling, Bon Jovi’s Livin’ On A Prayer, The Animals’ We Gotta Get Out Of This Place, The Beatles’ With a Little Help From My Friends and Bob Dylan’s All Along The Watchtower.

Who is your favourite Dunedin band?

The competition was fierce for this accolade, but the biggest vote went to The Chills, with 19 per cent of the 86 respondents choosing them as their top Dunedin band.

They were closely followed by The Verlaines and SIX60, with Netherworld Dancing Toys, The Clean, Straightjacket Fits and Look Blue Go Purple gaining honourable mentions.

Probably though this comment best sums up the collective feeling: “Oh come on!! Too many great bands to single out any one. Merge the Clean, Verlaines, Bats, LBGP, Snapper, JPSE, Sneakys, Chills and Paul Ubana Jones into one wall of classic reverbing beats and jangling guitars and we can start to talk...”

Footnote: You can see and hear more of the Dunedin Sound bands, including footage of The Verlaines playing in 1990 at the University of Canterbury at the Hocken Collections Uare Taoka o Hākena current exhibition; Kaleidoscope World: 40 Years of Flying Nun in Dunedin. The exhibition runs until 19 March 2022 and celebrates 40 years of Flying Nun and the Dunedin musicians associated with the record label. It features items from across the collection, including singles covers and posters, photographs, artwork and footage of band performances.

Saturday night at the Oriental

His ears ringing and singing
Took a leak on an ancient tree
Then by Victoria’s silent rotunda
Staggered and chundered,
Then lay for a while
Until Sunday cracked its dawning smile
The Bank street incline, for now, unconquerable