Understanding, tolerance and generosity at heart of special gift 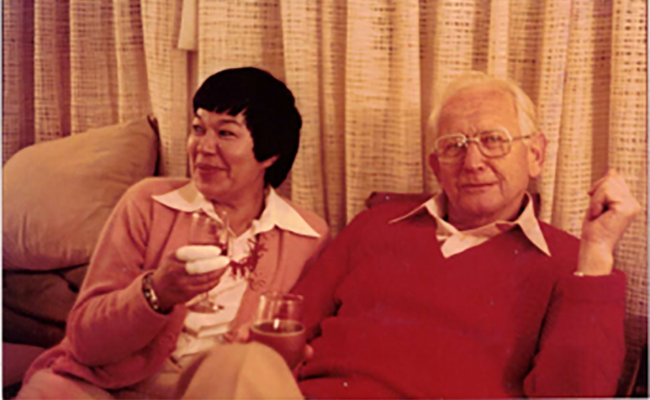 Mrs Geddes, who died in February 2020, left $1.3 million in her estate to establish an endowment, The Professor W. R. Geddes Bequest, to provide funding in perpetuity for scholarships for postgraduate Social Anthropology students. Professor Geddes died in 1989. The funds will be administered by the Otago Foundation Trust, with the first scholarships to be awarded in 2023.

“It will allow our postgraduate students at Honours, Master’s and PhD level to apply for funding to cover fieldwork, research and writing. Social Anthropology is characterised by its commitment to ethnographic fieldwork, long periods of immersion, engagement and building rapport amongst diverse peoples, places and communities in ways that foster cross-cultural competency and the exchange of knowledge of the kind that Professor Geddes championed and advanced in his own research in China, Thailand, Fiji, Borneo, Bali and India throughout his long career.”

Dr Rawlings says Professor Geddes’ bequest will allow the Social Anthropology Programme at Otago to support postgraduate scholars pursuing field-based projects that resonate with Professor Geddes’ vision of the discipline around the world.

“We would like to acknowledge our thanks and appreciation both to the late Mrs Ngaere and Professor Bill Geddes and their estate for this transformative bequest that will allow our postgraduate scholars and students to continue to advance anthropological knowledge with the rigour, commitment and enthusiasm that the Geddes’s embraced over many decades of research and service.”

Executor of the Geddes’ estate and former student of Professor Geddes, Nescha Teckle, says, “Otago seems to have inspired the minds of the Geddes boys”. 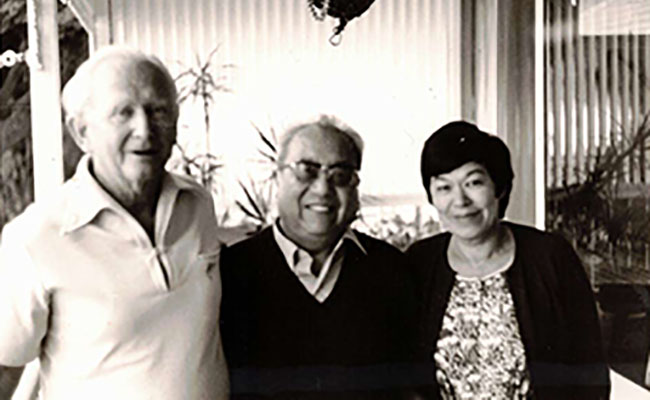 Ngaere and Bill Geddes at home with Professor Fei Hsiao-Tung, who visited and stayed with them in Australia (mid-1970s)

The couple’s paths first crossed in 1956, when the President of the Chinese Cultural Association invited a group of well-known social and cultural figures from New Zealand on a one-month tour of China. The delegation comprised artists, a farmer, a Presbyterian minister, a museum director, a historian, an anthropologist (Bill) and a primary school teacher (Ngaere). Serendipitously, Ngaere filled a vacant spot on the tour after a last-minute cancellation.

The pair fell in love during the tour, and in 1959 Ngaere joined Bill in Sydney. They married in 1963.

So began a life of shared travel, work, interests and friendships. From the late 1950s to the mid-1980s, the couple undertook extensive field work throughout the Pacific and Southeast Asia, living and working in Thailand, Fiji, Borneo, Bali and India. Between 1957 and 1962, they travelled and intermittently lived and worked among the ethnic minorities of northern Thailand. 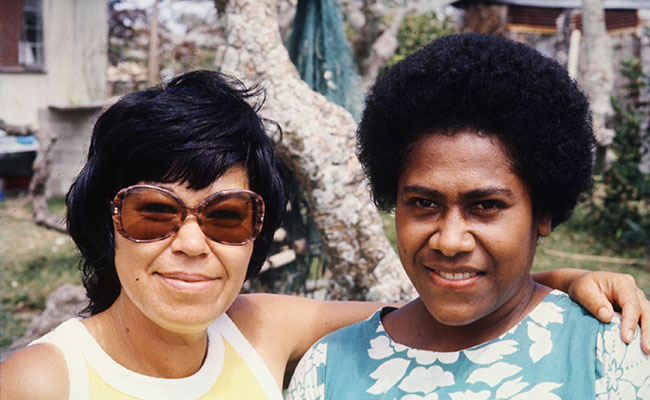 Ngaere Geddes (left) at Vatulele, Fiji 1973. . (Photo by Lew Parlette, who was mentored by and served as field assistant to Professor Geddes on the film Island of the Red Prawns, filmed in Vatulele Island, Fiji 1973.)

Nescha says Ngaere accompanied Bill on all his fieldwork in Asia and the Pacific, and as such was an integral part of the work and the people who inhabit his work.

Describing them both as educators, she says in keeping with their appreciation for cultures and perspectives other than their own, they created a life full of people from all corners of the globe.

“Understanding, tolerance and inclusive generosity underpinned their purpose in life. Theirs was a home of comings and goings - of anthropologists, artists, film makers, politicians, journalists, writers and poets, diplomats, architects, archaeologists; scholars from China, the UK and America and students from the countries where they lived and worked.”

Despite Bill’s exemplary academic achievements, Nescha describes him as a softly spoken, modest man, with an extraordinary sense of humility.

“He believed in the power of anthropology and the social sciences as a force of good in bringing cross-cultural understanding and perspectives.”

Bill and Ngaere also shared a love of the arts, material culture and ceramics, and over time amassed an interesting art collection and formed life-long associations with artists.

Interested in literature and an avid reader, Nescha says that into her nineties Ngaere could recite poetry by Keats, Tennyson and Shelley from memory. She was an active member of the Sydney Opera Society, serving as its treasurer for many years. Until the age of 88, she volunteered at the S. H. Ervin Gallery, one of the leading public art institutions in Sydney, housed in the National Trust Centre on Observatory Hill.

The couple were active members of the Pittwater community, northern Sydney, where they lived for more than 50 years. Bill loved sailing, fishing through Pittwater and up the Hawkesbury River.

“They cared deeply for the environment, supported the arts and contributed to social and cultural life in Australia immensely - in their younger years through their work and through volunteerism in retirement,” says Nescha.

Director of Development and Alumni Relations at Otago, Shelagh Murray, says “we are moved and deeply grateful to receive this very generous gift from Ngaere and Bill Geddes. After a lifetime of working to promote tolerance and understanding between cultures, it will be our honour to continue the aims and intent of their work by supporting our Social Anthropology students through these scholarships”.

After completing his master’s degree at Otago, Bill worked as a demonstrator in the Department of Psychology at Otago from 1939-1940.

From 1941-1945 he served in the Second New Zealand Expeditionary Force, spending most of his time in Fiji. This experience during the war was the basis for his Polynesian Society memoir, Deuba: a Study of a Fijian Village (1945).

He went on to gain his PhD in 1948 in the UK. His thesis topic reflects his continuing interest in Fiji: An Analysis of Cultural Change in Fiji. He then lectured in Psychology at Birkbeck College, University of London.

While visiting Peking (Beijing) in 1956, Bill contacted Fei Hsiao-Tung, a Chinese anthropologist who had written Peasant Life in China (1939), a study of a village on the Yangtze plain west of Shanghai. Fei Hsiao-Tung helped to negotiate an arrangement whereby Bill was able to write a sequel, Peasant Life in Communist China (1963), based on an intensive four-day reinvestigation. It was, according to the sinologist Dr Jonathan Unger, ‘a special window’ on a period when most sources were either governmental or partisan.

In 1959 Bill was appointed Chair in Social Anthropology at the University of Sydney, immediately making the subject available from the first year.

From 1964-70 he chaired the Foundation for Aboriginal Affairs. As a foundation councillor of the Australian Institute of Aboriginal Studies, he convened its film committee for almost a decade from 1963 and played a significant role in the development of ethnographic filming.

In 1964-65 Bill was an adviser to the Tribal Research Centre set up in Chiang Mai by the Thai government. The result is his major monograph, Migrants of the Mountains: The Cultural Ecology of the Blue Miao (Hmong Njua) of Thailand (1976), which discusses the economic and cultural role of opium among the Miao (Hmong), in particular, and the hill tribes in general. He was a member of United Nations study missions on opium in 1966-67 and 1970.

Bill was also a skilled photographer and taught himself the medium of 16mm film. His first film in the late 1950s was The Miao, of which the BBC produced a 30-minute version The Opium People, with commentary by David Attenborough. In 1961 he filmed The Land Dayaks of Borneo (1966) and then Miao Year (1968). He attached importance to film as a record of fast-disappearing ways of life. 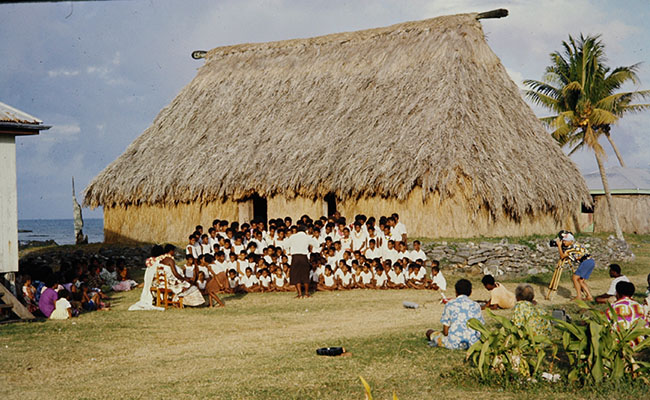 He filmed and produced further ethnographic films, including The Soul of the Rice; Brides of the Gods (1985); The Sacred Cow of India (unfinished) and The Island of the Red Prawns, Vatulele, Fiji (1974). During the 1970s and 1980s, in Fiji and Sarawak, he filmed ceremonies which were unlikely to be performed much longer. 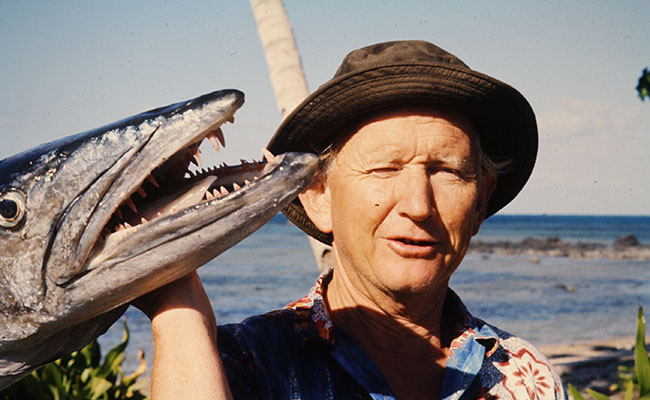 Following his retirement in 1981, Bill represented the Academy of the Social Sciences in Australia (of which he was a Fellow) at meetings of the Association of Asian Social Science Research Councils. He chaired the planning committee of the association’s fifth biennial conference, held in Sydney in 1983, and edited the proceedings of one of its symposia, Asian Perspectives in Social Science (1985), his last published work.

Throughout his life, whether teaching, writing or filming, Bill worked to promote cross-cultural perspective and understanding in the social sciences and tolerance in social life.

A good friend of his, Jack Golson, described him in this way: "Bill Geddes displayed a stubborn fixity of purpose that went well with his stocky build. He mixed tenacity with shrewdness and tempered both with a deep humanity and a self-deprecating sense of humour. Quiet and unassertive, he enjoyed the pleasures of gardening, fishing and the company of friends."