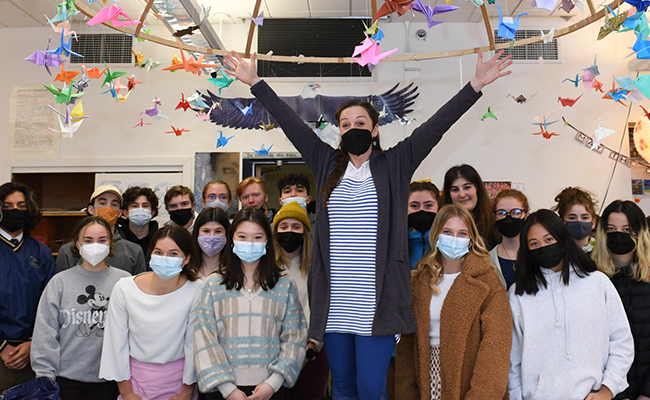 Temperance Tinker-Kays has been awarded a prestigious US$25,000 Milken Educator Award for excellence and innovation in education

On April 6, Temperance Tinker-Kays thought her school assembly was going on for ages, so she started to pick out who might be the teacher receiving the award which was going to be announced at the end.

“We have all these amazing teachers, people going above and beyond on many levels,” says Temperance, who teaches English to final year students at West High School in Anchorage, Alaska. “I can say with deep certainty I was sure that it wasn’t an award for me.”

But it was. To cheers from students, colleagues, state and local officials, Temperance was awarded a prestigious US$25,000 Milken Educator Award for excellence and innovation in education. She was one of 60 outstanding educators across the United States to receive the award.

Otago can make a small claim to her fame, as Temperance attended the University as an international student in 2005, gaining a Postgraduate Diploma in English – which she says gave her the confidence to go on to become an English teacher.

“Outstanding educators are role models that provide guidance students carry with them for years after they’ve left that classroom, and Temperance Tinker-Kay’s exceptional leadership and innovation have not gone unnoticed,” said Gallagher. “Her high standards, coupled with her ability to challenge her students to take intellectual risks, are what make her a Milken Educator Award recipient.”

Hailed as the ‘Oscars of Teaching’, the Milken Educator Awards celebrate the American teaching profession and inspire young, capable people to join it. Recipients are heralded in their early to mid-careers for what they have achieved — and for the promise of what they will accomplish.

Along with the financial prize, recipients attend the Milken Educator Awards Forum in Los Angeles, and receive coaching and mentor support from a network of 2,800 Milken educators. Adding to the star-studded feel of the awards, Oprah Winfrey, a longtime education advocate, shared her congratulations to this year’s winners in a video message shared earlier this year thanking “the most incredible educators around the country” and acknowledging her appreciation for their tireless work.

After getting over the surprise, Temperance says on the one hand she feels like, “oh my gosh I don’t deserve this – and yet on the other hand I’m like, wow teachers have been through so much and really all deserve this. So I think the recognition feels really good.” Her award citation says she creates a calm, nurturing, supportive environment. Of special mention are her ‘Vocab Slam” events where students use words they encounter during literature units to create unique slam poetry and think imaginatively.

"I loved the University of Otago. It was a welcoming environment for an outsider like me"

She emphasises the importance of thinking outside the box while building her students’ confidence and finding their voice. One example of this is her collaborative initiative with StoryWorks, a local organization that helps students develop and share personal stories. “It’s to get students to tell their story out loud without notes. The premise is we all have stories and stories matter and telling your story is hard but also really a powerful experience,” she says.

Temperance also mentors new teachers and often brings community members into her classroom for career exploration and workshops. As a lead sponsor for West’s Partners Club, she organized activities such as bowling, skiing and an annual Polar Plunge for life skills students and teen mentors, as well as taught students how to participate with medically fragile students. Thanks to her work in this area, ESPN included West High School on its 2019 Honor Roll as part of the Special Olympics Unified Champion Schools National Recognition Program.

“Some of the special Olympics athletes and general students together wrote a letter [of recommendation for her teaching], not knowing what it was for, just citing my excitement and energy around demystifying the special needs classrooms and why that’s important for our community. It was really sweet to hear those words back,” says Temperance.

While she says teaching is continually difficult, “it’s not a job where you can just show up and dial in”, there is huge reward when a student improves or you get to see their understanding and recognition grow. “That aha light which comes on above their brain when they get it, or with students who maybe don’t have the self-confidence.”

She says it’s also special to be able to read their essays for scholarships and college applications, and watch and coach them in the process of trying to reflect on their identity and tell the story of who they are. After growing up in a small town in Alaska, Temperance earned a bachelor’s degree in anthropology in 2003 from Northern Arizona University; her PGDip in English from Otago; and a Master of Arts in Teaching in 2007 from the University of Alaska, Anchorage.

She says Otago gave her the chance to see if she could be a writer and she “got really nerdy in really special English Lit ways that I hadn’t taken the opportunity to do yet. It was great.”

Presenting her thesis, however, was terrifying. “We had to present two or three times to the faculty about our proposal, then we had to read an excerpt, then we had to read it when we published it. That was for me like a coming of age. Can I do this, can I stand in front of other people and explore my theories on myth and literature and its importance? It was so scary but I survived it and I try to remind my students about that.”

She also enjoyed her classes in Cubism and Film. “I was so inspired, I thought ‘oh I’m out of my league here’, I was like hanging on.”

But as it turned out, she wasn’t really out of her league at all – Temperance won the Helen Brosnan Memorial Prize while at Otago, which is awarded to the woman student obtaining the highest average mark in the final examinations for English at 400-level. “That was a surprise. I was in class with people who just knew what they were talking about and I felt like ‘wow I read the same thing as you and I did not get that out of it’. I was honoured to have that.”

She says her study at Otago gave her the training in English she needed to do her Master’s and the confidence to teach other people how to write. While she was in New Zealand, she took the opportunity in the holidays to go WWOOFing (World Wide Opportunities on Organic Farms) around the South Island, appreciating the “good Kiwi humour about manure”. She also admits to watching Tiny Homes NZ on YouTube sometimes just to hear the Kiwi accent.

As for what comes next, with two small children, Temperance thinks she will be in education teaching English for the foreseeable future. However, she loves to travel and hopes one day when her children are old enough that she can spend some time teaching abroad. Her husband Matt is a science teacher, and she says the dream would be to learn a second language and go somewhere like Spain, Portugal or South America.

For now, she’s thinking about how to spend her prize money. Some of it will go into an education fund for her children, some will help with her parental leave costs, and perhaps some will be a pure celebration of her award and go towards attending Major League Baseball games in Atlanta and Seattle.