Congratulations to Professor Neil Gemmell, Professor Dave Grattan and Dr Helen Taylor who have been awarded funding from the Royal Society of New Zealand’s Marsden Fund. The Fund supports research excellence in science, engineering and maths, social sciences and the humanities from all tertiary/research institutions in New Zealand, and is regarded as the hallmark of excellence for research in New Zealand.

To have three grants awarded to staff in this Department is quite an achievement, and an indication of the world-class research being undertaken in the Department. 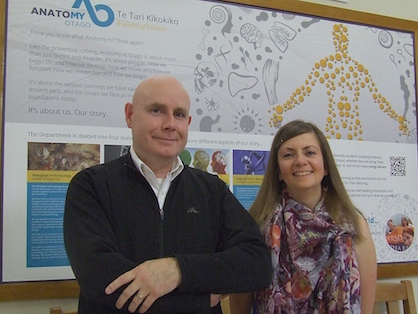 Professor Neil Gemmell
Parasitic Puppeteers – How do They Pull the Strings?
$830,000

Parasites can have profound effects on the animal hosts they invade, manipulating host biology with exquisite precision to enhance host-to-host transmission. One of the most extraordinary of these host manipulations is the water-seeking behaviour that some nematodes and hairworms induce in their hosts so that the worms might exit the host and reproduce. The process is the stuff of science fiction; the worm hijacks the host’s central nervous system forcing it to seek water. Once water is found the adult worm, often many times the size of the host, emerges, sacrificing the host. This amazing alteration in behaviour is induced by parasitic worms spanning two phyla (Nematoda and Nematomorpha) and is observed in a variety of arthropod hosts, notably crickets, weta, earwigs, and sandhoppers, leading us to hypothesise that a common and conserved mechanism is being utilised by the parasites to induce this behaviour in their hosts. Here we propose to couple field and laboratory studies of two phylogenetically distinct hosts and their parasites, with powerful genomic and bioinformatic comparisons to elucidate the trigger and genetic cascade through which these parasitic puppeteers elicit this highly conserved, yet astonishing behavioural response.

Inbreeding negatively affects a wide range of life history traits in taxa as diverse as humans and plants. Mitigating the effects of inbreeding depression has been a key focus in animal husbandry and horticulture for millennia and, more recently, inbreeding has become a key topic in conservation science. It is well known that inbreeding negatively affects male fertility across a variety of taxa, but this phenomenon has rarely been examined in species where males are the homogametic sex (e.g., birds), or in the wild. While several sperm quality traits are known to be depressed by inbreeding (sperm morphology, motility, and DNA fragmentation) the interplay between these traits remains unexplored. The common fragility of male fertility suggests inbreeding disrupts a conserved set of genes across taxa, but these genes are yet to be identified. We will use a novel combination of genotyping by sequencing, computer assisted sperm analysis, and DNA fragmentation assessment to conduct a comparative study of inbreeding depression of male gamete quality in New Zealand's birds – the first such study in any wild system. We aim to elucidate the relationship between inbreeding and sperm quality, and identify candidate genes that might be responsible for infertility in inbred males.