Media enthralled with ‘hunt’ for monster

The University of Otago’s Professor Neil Gemmell is currently in Scotland, leading a team of scientists as they search for DNA clues to prove or disprove the presence of a mysterious monster in the waters of Loch Ness. The project gained so much attention that Otago Communications Adviser Ellie Rowley accompanied the team to assist with the media. She filed this report from Drumnadrochit. 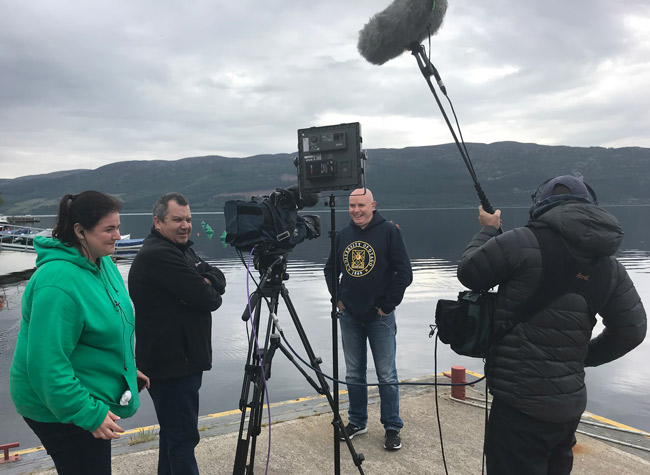 Otago's Professor Neil Gemmell fronts up for the media on the shores of Loch Ness proudly wearing his University colours.

Drumnadrochit, a small village in the Scottish Highlands, is a peaceful spot frequented by tourists hoping to enjoy a bit of hiking, history, and the chance to spot a monster.

Last week, though, teams of international media swarmed in to meet the man behind the latest plan to “find Nessie” – the University’s own Professor Neil Gemmell.

He and the team arrived at Loch Ness last Saturday and, overcoming some minor hiccups involving international couriers and equipment, cracked into their e-DNA testing of the loch’s waters.

The weather in the Highlands has been unprecedentedly warm and sunny, allowing for plenty of sample collecting to be carried out.

So far, they have gathered more than half of the 300 samples they require.

When he is not out collecting water samples, Professor Gemmell has been flat-out conducting media interviews via phone, Skype and email.

The first dedicated media day was Thursday, with four television crews and two photographers descending on Drumnadrochit, all wanting a bit of the Nessie action.

While he was asked some interesting questions, including “Have you thought about how you would react if you were attacked by the monster?” (Note, the response was: “Run. Then probably change my trousers.”), Professor Gemmell hopes the public can see past the Loch Ness monster and understand the importance of the science and what the research is trying to achieve – to unmask the identity of every species living in Loch Ness and learning new ways to monitor and protect ecosystems.

Professor Gemmell is pleased with the team’s progress and enthusiasm. Bringing together groups from different nations and institutions, including the Loch Ness Centre, and University of the Highlands and Islands, has made it a truly collaborative effort.

Results from the research are due in January 2019.

For more information about the project, visit www.lochnesshunters.com.