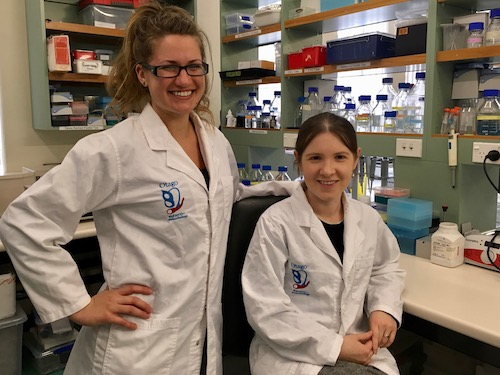 Research Fellow Dr Rosie Brown (on the right in the photo above) was awarded the Michael Harbour Prize for Young Investigators from the British Society for Neuroendocrinology. The prize is awarded each year to an outstanding member of the emerging generation of neuroendocrinologists.

In receiving the award, she was invited to give a lecture at the 9th International Congress of Neuroendocrinology (ICN) meeting held in Toronto, Canada. Her presentation showed how the hormone prolactin acts in the hypothalamus to induce a mother to show maternal nursing behaviour towards her offspring when they are born.

Rosie has also been invited to write a Young Investigator Prize review for the Journal of Neuroendocrinology.

Dr Kristina Smiley (on the left in the above photo) received a Young Investigators Award at the Society of Behavioral Neuroendocrinology young investigator symposium held at the ICN meeting in Toronto. The award is presented to senior graduate students or postdocs who “have a substantial story to tell about their research”.

Kristina’s award was based on her recent PhD research which looked at the role of the hormone prolactin in avian parental care behaviours from a neural and hormonal perspective.

She has developed several new protocols for measuring hormone levels and hormone receptor distribution in avian brain tissues which has allowed her to measure prolactin in the blood and measure prolactin receptor density in the brain of zebra finches, methods which are novel to this species.

As part of the award, Kristina has been invited to submit a Young Investigators review for the journal Hormones and Behavior.

Both awards were presented at the joint meeting of the 9th International Congress of Neuroendocrinology (ICN) in Toronto. The meeting is the largest gathering of neuroendocrinologists in the world, attended by over 1,000 scientists, held every four years.