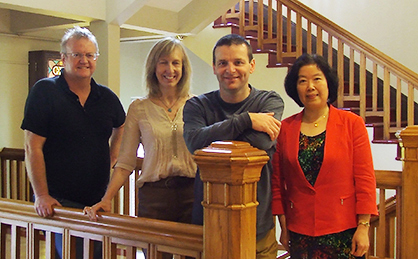 Four researchers from the Department of Anatomy have been successful in securing funding worth around $7.3M from the Health Research Council of New Zealand. The projects being funded relate to major health issues affecting many New Zealanders – stress and anxiety, obesity, and Alzheimer's disease.

Head of Department Professor Neil Gemmell said he was delighted to hear of the funding success, and the recognition and support of the top quality research being undertaken in the Department.

The research projects are:

Targeting the RFRP neuronal system to control stress and anxiety

Associate Professor Greg Anderson (Anatomy)
$1,189,211
Hyperactivity of the stress axis is thought to be one of the fundamental underlying drivers of psychiatric conditions such as generalised anxiety and depression. This has led us and others to develop pharmacological approaches to modify neural stress pathways in the brain. Along these lines, we have recently discovered that the neuropeptide RFRP-3 induces anxious behaviour and enhances acute stress responses in mice. Remarkably, blockade of its receptor with a novel antagonist called GJ14 overcomes these responses. Using powerful new transgenic mouse lines and single cellular through to in vivo behavioural measurements, we will evaluate the role of RFRP-3 on activity of the cells controlling the stress axis, stress hormone secretion and various anxiety-related behaviours. We will then develop and evaluate new RFRP-3 receptor antagonists with improved ability to enter the brain following oral delivery, potentially opening an entirely new avenue for treating stress and anxiety related disorders.
Other Otago named investigators:
Dr Karl Iremonger (Physiology), Associate Professor Joel Tyndall (School of Pharmacy), Dr Andrea Vernall (School of Pharmacy)

Professor David Grattan (Anatomy)
$1,195,100
We have identified a novel brain response that occurs after eating a meal. The aim is to determine the role of this response in the normal regulation of food intake, and to determine whether abnormalities in this response might contribute to the development of obesity.
Other Otago named Investigator:
Dr Alexander Tups (Physiology)

Professor Cliff Abraham (Psychology) Dr Joanna Williams (Anatomy), Associate Professor Ping Liu (Anatomy), Dr Stephanie Hughes (Biochemistry), Professor Warren Tate (Biochemistry)
$4,933,052
Alzheimer's disease (AD) presents an enormous and growing health, social and economic challenge for New Zealand, which has a dramatically aging demographic. AD is not treatable, and inflicts societal costs greater than cancer, heart disease and stroke combined. This Programme of research focuses on learning more about the mechanisms of Alzheimer's disease so that more effective therapies can be developed. We will study molecules in the post-mortem Alzheimer brain that may be key players in the disease process, and use new and improved models of the disease to determine if these correlate with the development of the disease from its earliest stages. We will then undertake preclinical tests of novel therapeutic strategies, building on our recent successes in this regard. This research will extend understanding of how we can harness the brain's own neuroprotective and memory-enhancing molecules to fight the disease.
Other Otago named investigators:
Dr Hu Zhang (School of Pharmacy), Dr Bruce Mockett (Psychology), Dr Yu Jing (Anatomy), Dr Lucia Schweitzer (Biochemistry)