Mārama is a new viral vector and optogenetics platform founded by BHRC members Dr Louise Parr-Brownlie and Dr Stephanie Hughes. The platform is funded and operated through Brain Research New Zealand Rangahau Roro Aotearoa, a centre for research excellence that both Hughes and Parr-Brownlie are members of. 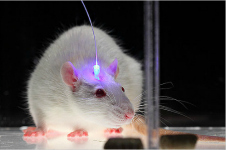 There are four main stages to go through before you can activate the cells with light. Firstly, you need the DNA of a light-sensitive receptor. This DNA is extracted from organisms who respond to light, like green algae, and separated from the rest of their genome.

Secondly, you need to find a way of getting that DNA into the cells of the brain. To do this the DNA is packaged in a viral vector, which a virus that has been hollowed out and no longer has any of its previously harmful genetic information. Depending on which type of virus you use this vector can either be injected directly into the brain, spinal cord or peripherally into a vein. Each cell affected by the viral vector will receive the DNA of the light-sensitive receptor so the researchers have to be careful about how they administer and control it.

Thirdly, the DNA of the light-sensitive receptor has to be expressed, and the receptor shuffled to the outside of the cell. Only then can you take the last step of activating the receptor using a tiny LED which is implanted into the brain. Optogenetics gives researchers very specific control. It enables them to activate the cells they want without activating any they don’t, turning cells off and on like a switch. However, the learning curve is steep. This is where Mārama comes in.

This new platform provides not only the resources to complete experiments but also the expertise of both Dr Hughes and Dr Parr-Brownlie. Mārama shows great promise for assisting the scientific endeavours of researchers in New Zealand. We look forward to seeing it, and the research around it, progress in the coming years.