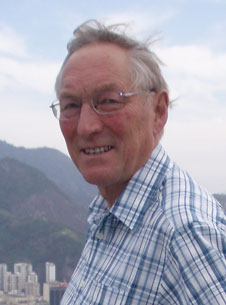 The University will this weekend confer an honorary Doctor of Commerce degree on one of its distinguished graduates, Mr Ian Farrant, CNZM.

Mr Farrant graduated with a Bachelor of Commerce in Accounting & Finance and Marketing in 1966. During an illustrious career spanning over 40 years, he was a Chartered Accountant and professional director for dozens of public and private companies across New Zealand.

Vice-Chancellor Professor Harlene Hayne says she is delighted for the University to honour such an outstanding graduate who has made a substantial contribution to Otago and the wider community.

“Mr Farrant exemplifies a business leader who has had a significant influence in raising the profile of New Zealand’s business community and supporting the contribution business makes to the well-being of the nation,” she says.

Born in Tapanui in 1941, Mr Farrant began his career as a taxation specialist before launching himself as a professional director.

The list of boards he chaired and companies he directed during his career is extensive. He is the former chairman of Fulton Hogan, the New Zealand Refining Company, New Zealand Shipping Corporation, Cardrona Ski Area, the Skeggs Group, New Zealand Salmon Co, Broadway Industries (now known as the Mercer Group), and many others. He is a former director of approximately 40 companies including: New Zealand Post, Silver Fern Farms, the Combined Rural Traders Society, Westpac, St Lukes, Direct Capital, Queenstown Airport and City Forests. He also served in the public sector as a member of the Securities Commission, Transit New Zealand and chaired the Southern Region Health Authority, amongst others.

During much of his distinguished career, Mr Farrant served as a mentor for many in the national business community and was a champion of business in the Otago region. His community involvement includes significant contributions to a number of charities through his private charitable trust.

From the early 70s to the mid-80s, Mr Farrant held strong ties to the University in supervising, through his accounting partnership Peat Marwick Mitchell (now KPMG), the total teaching resource for Professional Studies that included Taxation, Trustee Law and Accounting, and Auditing. Over this period, he contributed significantly to the Education Committee of the NZSA (now NZICA).

In 2007 Mr Farrant was appointed as Companion of the New Zealand Order of Merit (CNZM) for his long-term contribution to business and community.

At the time of that award, he told The New Zealand Herald, “I have had an extraordinarily exciting time. I would have made a lot more money, I guess, if I had stayed in the [accounting] practice. But the freedom, the ability to be your own person, the diversity you get from being a director. You meet so many good people and good management.”

Mr Farrant is only the second individual to receive an Honorary Doctor of Commerce from Otago. The first was awarded to well-known business leader and philanthropist Mr Graeme Marsh in December of last year.

Mr Farrant will give the graduation address for Saturday’s 4pm ceremony at which he will have his Honorary Doctorate of Commerce conferred.