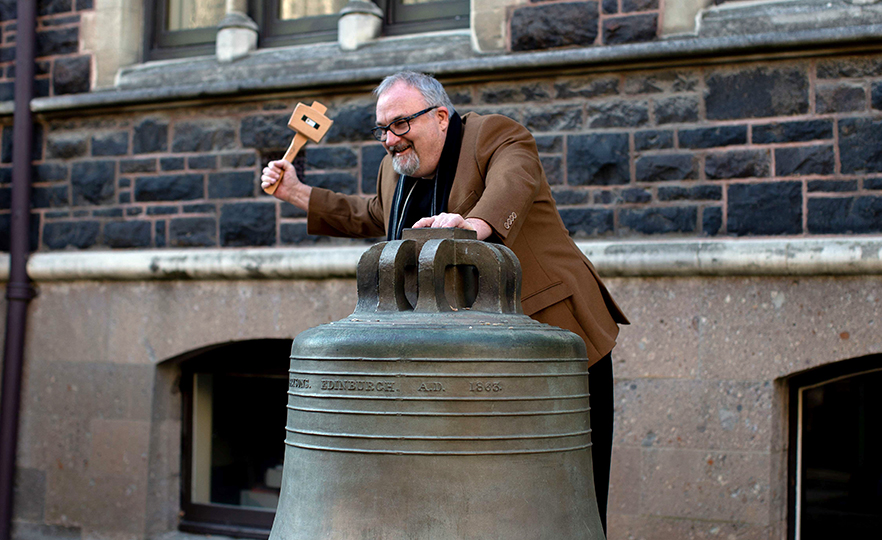 James Wilkes celebrates the completion of his doctorate.

James graduates from the DBA this Saturday with the first cohort of the new degree.

Launched in 2015, the Otago DBA is designed for business professionals who are looking for a challenge. Students all continue to work full-time while studying. They resolve critical problems for businesses and industries through the application of research and theory in a practical business environment.

James examined the NZ red meat industry as his major research project and set out to understand why meat producers and processors were achieving such poor performance and profits.

With a strong marketing background, he decided to view this as a marketing problem. One of the marketing profession’s leading lights, Professor Theodore Levitt, initially developed the theory of “Marketing Myopia” in the 1960s. James exploited the core principals of Levitt’s findings to underpin his research.

“This (Marketing Myopia) is a huge problem for one of New Zealand’s major export industries, which including livestock production, processing and exporting accounts for direct and indirect employment of 92,000 Kiwis,“ James says. (Employment rates taken from Beef and Lamb and MIA agency information).

“Levitt’s theory contains four key preconditions and if organisations meet these preconditions then not nice things happen. For example, Kodak invented the digital camera in the 1970s, but were so wedded to film they missed the transition to digital photography. Netflix is another classic example; its founders offered the business to DVD giant Blockbuster for several million dollars, but Blockbuster said, ‘no that’s a crazy idea’.

“So, the proposition I’ve spent the last four years proving is that the NZ red meat industry can’t see the wood for the trees. It’s a wakeup call about looking after your customers.”

Initially he was planning to do his project on a portfolio of NZ products including honey and wine, but ended up studying the red meat industry as it simplified the research parameters.

His research into the red meat industry took him right around the globe including Buenos Aires, Singapore, Malaysia, London, and California.

James says he asked a retailer in a well-known San Francisco store where the NZ lamb was, and they said it was, “around the corner in the mid-priced section”. The lamb they were really excited about came from Iceland and Colorado.

He says that NZ red meat does not feature as prominently in the top end of global market as many Kiwis would like to think, and there is tough competition out there from many other beef and lamb producing countries.

As part of his project, he set up a live prototype business in Nelson that was buying and selling beef and lamb. This formed the applied component of the research and was due to be commercialised before COVID-19 arrived on the scene and scared off investors.

To test his assumptions, James decided to attack the problem from three angles. He interviewed key executives from right across the industry, which he says sounded alarms. Then he followed the money, and found that both the farmers and meat processors weren’t making much money. He says the annual reports of big meat processors “read like a horror story”. The farming model was not providing a great return either and the argument to allocate capital was often flawed.

“This project has come up with some pretty radical ways for improving marketing for the red meat industry in New Zealand and that research effort continues.

“We need to establish equity for all those involved in the red meat supply chain.

“It depends whose figures you use, but NZ’s primary exports are worth around $40 billion dollars at Free On-Board value, and by the time those products reach consumers estimates suggest they can likely to be amplified to be worth somewhere in the vicinity of $140 billion. There are some legitimate costs there, but where’s the distribution equity?”

“When you look at the beef and lamb industry in NZ the average return for many beef and lamb farmers is very poor considering the risk along with alternative options for allocating capital.”

James says he now has a range of businesses that want to take part in further developing his marketing technology and he’s seeking funding to see if he can “tip this unworkable model on its head”.

“Wow, this is exciting we can try and develop some tools that will make our exporters and farmers more powerful and even if they get one or two per cent more that can make the world of difference.”

James finds it very hard living in New Zealand as an Australian and seeing this country’s standard of living slipping further behind.

“I love NZ, I love my Kiwi family; I have been coming and going from this country since I married my Kiwi wife Michele (a management accountant) in Nelson in 1983. I thought, 'what can I do to help this country even if it is only in a very small way?' and that’s what kicked off my research.”

He says when he moved back to NZ in 2008, then-Prime Minister John Key was constantly talking about closing the income gap with Australia, but as far as he’s seen NZ incomes have continued to decline relative to Australia. “They certainly have not managed to reach parity and the bold talk of closing the gap has gone quiet.”

James completed Otago’s Master of Entrepreneurship programme with Distinction and was offered a scholarship to pursue his DBA, which he says was the “perfect step” to amplify what he had learnt in the master’s programme in a real-life setting.

“If I’d gone down a PhD route, I would have spent all my time looking at the theory and that would have been interesting, but I don’t think we’d have come out with a different way of doing things.

“As I see it, the DBA is a great opportunity to build bridges between industry and academia. The expertise is right here and available now, it just isn’t being channelled to where it needs to go. It isn’t being capitalised on. New Zealand’s tertiary institutions have extensive knowledge, expertise and global networks and they are pretty much ready to plug and play and that will release some of the best marketing brains in the world.”

There were five students in his original enrolling cohort for the DBA, and he says 100 per cent of his class are expected to graduate, which he says is a credit to the support offered by the University of Otago.

“The DBA has been fantastic on so many fronts. I’ve loved the University of Otago; I have met so many wonderful people both in terms of faculty staff and other students.

“I think what I got most out of the DBA is that it changes the way you think. It’s huge value and you only realise when you look at a problem in a totally different way. I’ve been working in marketing for 35 years and was surprised about how much I didn’t know. It is a very humbling experience, but you never stop learning and that’s exciting.

“The more deeply you dig the more likely you are to find a pearl. It’s taught me to think far more critically than I ever had.

“My biggest fear is that the programme produces a massive amount of research that could be harnessed by institutions such as the Callaghan group and nothing is done with it.”

DBA Programme Director Sarah Carr says it was an absolute pleasure to have James in the first graduating class.

“He brings great passion to whatever he does and even after investing a very significant amount of his own money into the project just before the global pandemic struck, he took on the challenges presented all as part of the learning curve,” Dr Carr says.