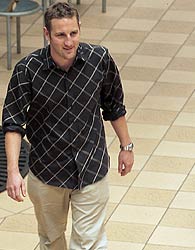 It's a job so perfect-sounding Warrick Low is obliged to get in his first quip quickly.

That smile on his face is not from the brewery fumes - it stems from the satisfaction of one who followed his nose and ended up doing exactly what he wanted to.

Having started an accountancy degree while based in Invercargill, the boy from Gore found the world opened up once his feet hit the Dunedin campus and he diverted into marketing, management and even a bit of design. The Tourism Department was small and he initially took a paper just to grab a few points. But the paper grabbed him back and he was hooked.

The department evolved before his eyes and he emerged with a Bachelor of Commerce and a Graduate Diploma in Tourism.

Looking around him, many of the people in the top tourism jobs are Otago graduates and he hasn't cut his ties with the University as he continues to work towards his Master's in Tourism.

"At one point I did think I'd do a PhD but I like beer a lot more," he says with a chuckle.