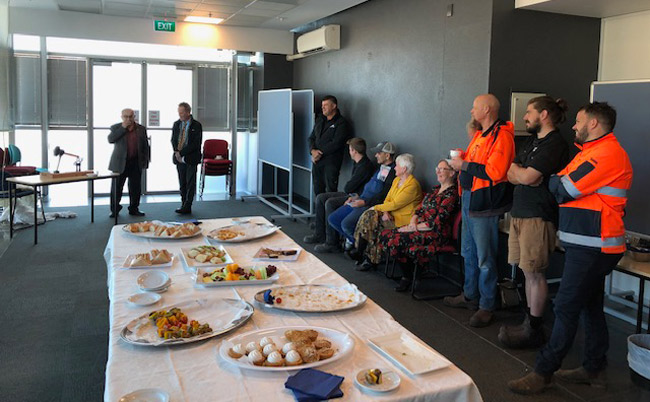 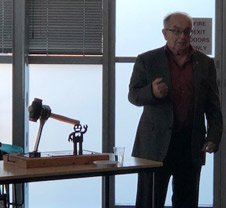 Murray Clarke and the ‘Thor Hammer’ gifted to him by the contractors he worked with.

Christchurch Facilities Manager Murray Clarke was farewelled by staff and contractors recently at an event to celebrate his 30 years’ service to the University.

Mr Clarke’s dedication, sense of humour and fortitude following the Christchurch earthquakes were particularly noted during the farewell event with staff and contractors who worked with him over the years.

To show their respect, contractors - including builders, engineers and painters – together made and presented Mr Clarke with a sculpture called ‘Thor Hammer’. The sculpture is made with a malleable iron head fitted with one rawhide and one coper cylindrical face, representing the engineering tasks of assembly, repair, and maintenance.

Mr Clarke joined the University of Otago in 1989 after working as an engine mechanic on ships at port and sea, and overseeing maintenance of the Ministry of Education’s facilities portfolio.

He worked at the University of Otago, initially as a part time team member, then in the full-time Facilities Management role from 2000. Macaulay said he was a ‘stabilising force’ following the 2011 earthquakes and provided support to many staff and students over that turbulent time.

"I think Murray will be best remembered for his dry sense of humour and warm nature."

“He is remembered by many as a first responder to site. Murray oversaw the rebuild of our Christchurch main campus, and during the earthquakes Murray spent several nights in his office acting as the point of conduit for building related matters,’’ Mr Macaulay said.

“I think Murray will be best remembered for his dry sense of humour and warm nature.”

Dean of the University of Otago, Christchurch, Professor David Murdoch says Mr Clarke’s background as an engine mechanic paid off when the big quakes hit the campus’ main building.

“Because of his work on ships he had secured a lot of things, including research fridges and laboratory equipment.”

Professor Murdoch says Mr Clarke was a Justice of the Peace and provided this service to many University and Canterbury District Health Board staff.